Radical surgery for malignant pleural mesothelioma (MPM) is a major undertaking for any patient which unfortunately cannot be intended to lead to a cure from the disease (1-3). Extra-pleural pneumonectomy (EPP) and extended pleurectomy/decortication (EPD) are the most common surgical techniques performed with the intent of prolonging survival. In experienced centres the perioperative survival from these major procedures is acceptable; patients undergoing EPD surgery show a lower short-term mortality of 1.7% compared with patients undergoing EPP surgery that show a higher short-term mortality of 4.5%, whereas both procedures are associated with similar long-term mortality. The better perioperative mortality has led to a recent trend towards preference to EPD, whenever possible (4-9). As the treatment of post-operative complications may contribute to improve the patient survival, it is imperative that morbidity is reduced by awareness of the complications of these extensive operations and where possible preventive measures should be employed but if these are unsuccessful then prompt remedial action should be taken.

Complications following these operations can be considered in three major categories:

Parenchymal atelectasis is a common early postoperative complication caused by retention of mucus and blood clots and is more frequent in the ipsilateral site following EPD related to the parenchymal injury and intrapulmonary haemorrhage of visceral pleurectomy. Prevention is by adequate analgesia, aggressive physiotherapy and early mobilisation. Epidural analgesia and the use of portable suction drainage devices are advisable.

Pneumonia is a sequelae of sputum retention and develops postoperatively in approximately 2% of patients after both EPP and EPD (4,10-23) and it may have more serious implications following EPP as patients have only one remaining lung (22). The risk can be reduced by perioperative nasogastric drainage and cautious reintroduction of oral fluids to prevent aspiration. The use of prophylactic broad spectrum antibiotics is advisable. Many patients may contract a hospital-acquired pneumonia but many may also harbour preoperative infection in an entrapped lobe or infected pleural effusion.

Interstitial pulmonary oedema is early complication is usually not cardiogenic and occurs most commonly in patients who have undergone EPP in whom the remaining lung receives an increase in blood supply. It may be compounded by excessive intravenous fluid administration and the necessity for blood product transfusion (8,24). The prophylactic pre-pneumonectomy use of inhaled nitric oxide may reduce the risk. In the first 72 hours postoperatively the patient may develop oedema and early use of intravenous diuretics is strongly advised.

ARDS is an acute respiratory failure in absence of heart failure or systematic fluid overload characterised by a specific clinic-radiological picture of profound hypoxia associated with widespread opacification (Figure 1). The fluid accumulation in the lungs is due to pathologic permeability of the capillary-alveolar barrier caused by a multifactorial aetiology consisting of endothelial damage secondary to pneumonia, blood transfusion, aspiration and lymphatic damage (25). It occurs more commonly in patients who underwent EPP rather than in those after EPD and it is associated with high mortality, approximately 1:3 patients may die (4,10-23). 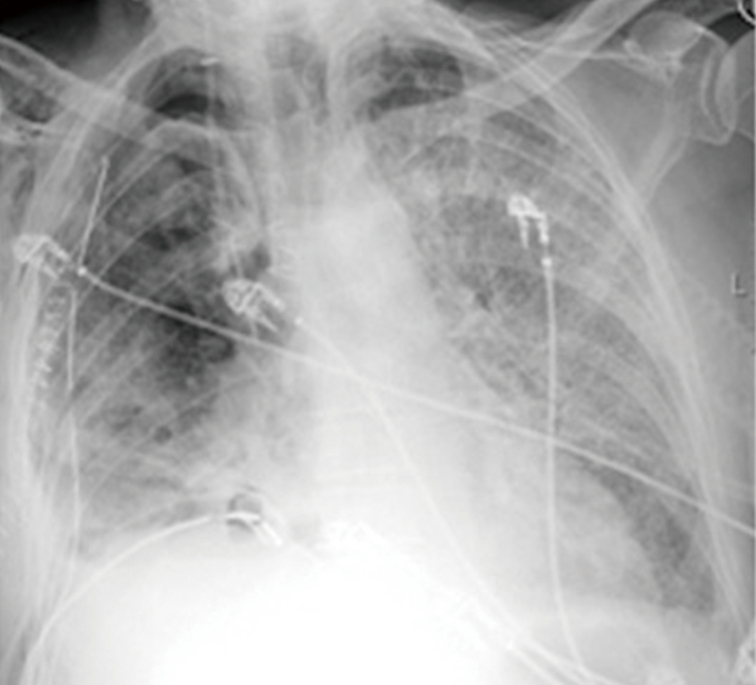 Broncho-pleural fistula (BPF), as early postoperative complication, may occur more commonly after EPP in 2.3% of cases than after EPD in 0.4% of cases and may be associated with surgical technique issue, chest infection, prolonged mechanical ventilation, stagnant mucus in the bronchial stump and preoperative radiotherapy. As late complication, the BPF may occur following formation of empyema or recurrent tumour at the bronchial stump (4,8,10-23). Prevention of BPF starts with careful division of the bronchial stump as close to the carina as possible and it should ideally be covered by surrounding tissue which can be a challenge after EPP; we have found that an intercostal muscle flap is the preferred method. Management is complicated. Primary closure is very difficult and may require transfer of the omentum into the chest across the prosthetic patch or via the retrosternal route to buttress the suture line. Often all that can be achieved is drainage and sterilization of the post-pneumonectomy space.

Prolonged parenchymal air leak is a common complication after EPD surgery (approximately in 6% of the cases). It is caused by persistent postoperative air-leak due to the extensive removal of the visceral pleura and risk of damage to the bare underlying lung parenchyma (4,10-23). Meticulous dissection of the visceral pleura can be facilitated by intraoperative ventilation of the underlying lung. Intentional stapled resection of the peripheral lung in areas of potential invasion is suggested to reduce air leak. The use of an aerosolized biological sealant over the denuded lung surface is advisable. Postoperatively, every attempt should be made to expand the operated lung: the use of multiple drains and portable suction may be useful.

Pleural Empyema is post-operative complication more common in patient who underwent EPP than in those who underwent EPD and is associated with increased postoperative morbidity due to the increased risk to develop into BPF (4,10-23). Despite parenteral antibiotics it is difficult to control the pleural infection if the prosthetic patches become contaminated. In addition, there may be associated deep dehiscence of the thoracotomy wound and the potential for systemic sepsis and respiratory failure. We routinely lavage the operative cavity with an iodine solution at the end of the procedure primarily to attempt to sterilize the field. Control of air leak is the best prevention. The use of a biological rather than synthetic prosthetic patch reduces the potential for persistent infection and the need for reoperation (26). Nevertheless, early debridement is recommended to prevent later more major complications.

Immediate postoperative hypotension is a common complication of major mesothelioma surgery and it is associated with significant fluid loss and hypovolaemia. This can be compounded by vasodilatation from epidural analgesia and a sympathectomy effect of extrapleural dissection. Whilst vasoconstrictors may be necessary, early awareness of the insidious intraoperative fluid loss and judicious fluid replacement is important to prevent perioperative hypotension and the risk of renal impairment.

Cardiac herniation is another uncommon complication occurring when the heart protrudes through a defect of the pericardial patch. It can be caused by a sudden change in patient position or the application of negative pressure to a chest drains (4,10-23). The clinical symptoms depend on the side of the herniation: right sided herniation produces symptoms due to compression of the superior vena cava; left sided herniation results more often in tachycardia and hypotension (22,27). Although CX-ray can be used for evaluation, diagnosis is typically clinical and a surgical treatment is necessary in the majority of the cases.

PE is a rare complication, but potentially lethal. PE may be the main cause of death in patients undergoing EPP (22). The PE is more common in EPP with an incidence of 3.3% compared to EPD with an incidence of 1.4%. The risk for PE is increased by presence of malignancy and previous chemotherapy and restricted mobility during the early postoperative period (4,10-23). CT pulmonary angiography is the imaging test of choice for the diagnosis of PE. The risk of PE may be reduced using prophylactic therapeutic anticoagulation and early postoperative mobilisation.

Haemothorax is an early postoperative complication more common after EPD surgery. It may be caused by continued low volume bleeding from the exposed parietal and visceral surfaces which will abate after EPD if the lung can expand and tamponade these surfaces (4,10-23). Re-exploration should not be delayed as the patient will suffer severe consequences from large volume transfusions of blood products and may develop haemodynamic instability. Prevention is achieved by careful haemostasis of chest wall vessels prior to closure and possibly by the application of local haemostatic materials to the parietal surface.

Chylothorax is a postoperative complication caused by leakage of chyle accumulating in the pleural cavity. It can be caused by a destruction of the thoracic duct or lymphatic tributaries in the course of radical pleurectomy along the mediastinum. It commonly develops once the patient begins eating and is characterised by rapidly increasing of pleural effusion and a drainage of around two to four litre of fluid per day. The diagnosis can be easily made by raised triglyceride levels in the pleural fluid (28). Prevention can be considered by intentional identification and interruption of the thoracic duct during the operation. In our experience, conservative management is unlikely to succeed in the face of a traumatic rupture of the duct and therefore we suggest early thoracoscopic examination and clipping of the duct at the site of the leak. The leak is best identified by oral administration of a high fat drink about 30 min prior to the surgery. The resultant increase in fat absorption can be seen as a chylous leak at the site of rupture.

Prosthetic patch dehiscence is most commonly seen of the diaphragmatic patch at its peripheral suture attachments and has an approximate equal incidence after EPP and EPD surgery. A sign of patch disruption may be an acute onset of a cardiac arrhythmia associated with presence of complex gas-patterns on chest X-ray suggestive of gastrointestinal herniation (Figure 2) in the thoracic cavity (4,10-23). Prevention is addressed at secure fixation of sutures in the periphery of the patch into the surrounding chest wall by using pericostal or buttressed sutures. Care should be taken if an attempt is made to preserve all or part of the native diaphragm. The muscle may not be robust after removal of the diaphragmatic pleura resulting in herniation. The judicious use of nasogastric tube drainage together with controlled reintroduction of oral fluids will reduce the incidence of both acute gastric dilatation and retching which both predispose to patch dehiscence. Intrapleural sepsis will increase the risk of patch dehiscence as infection will lead to erosion of the peripheral sutures through inflamed tissue. Prevention is as above. 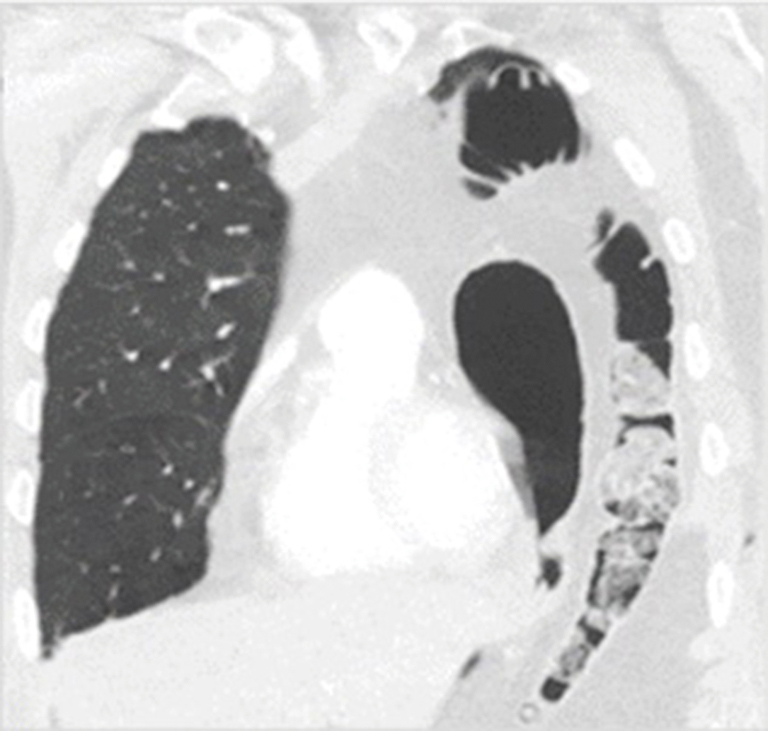 Oesophagopleural fistula is a rare post-operative complication for MPM surgery associated with a high mortality (4,10-23). It may develop as early complication resulting from removal of tumour strongly adherent of the oesophageal wall or as late complication possibly resulting from the presence of empyema of the thoracic cavity, postoperative radiotherapy in the area of local tumour recurrence (29). The diagnosis should be suspected when chest drainage increases once the patient begins oral intake and can easily be obtained by contrast CT (Figure 3). Early surgical repair can be attempted using buttressing with intercostal muscle but the surrounding sepsis may prevent healing and necessitate oesophageal stenting. 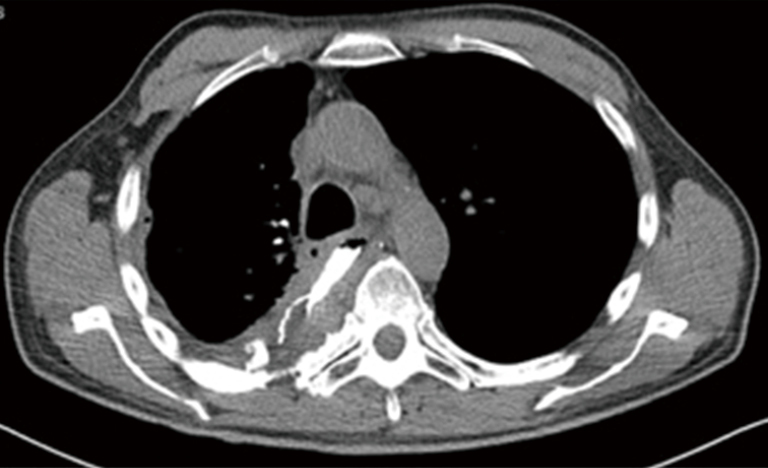 Radical surgery for MPM is an extensive, prolonged operation which may not be performed frequently in most centres. There are many potentially serious complications which can only be anticipated and prevented in experienced units. Early intervention if the postoperative course is not progressing satisfactorily is required to minimise mortality.