Is there an indication to robotic approach for advanced stage thymic tumors?

Despite being rare tumors, thymomas are the most common neoplasia of the anterior mediastinum (1). Surgery is the mainstay of therapy in early stage disease and a fundamental component in the multimodality approach to advanced stages. Independently from the stage, completeness of resection is one of the main prognostic factors (2). Historically, resection has been commonly carried out through different open approaches, mainly through median sternotomy, which is still considered the gold standard. In more recent times, minimally invasive techniques have been described for thymectomy either for benign or malignant diseases (3), but this approach to in thymic malignancies is still matter of debate.

The surgical challenges of thoracoscopic mediastinal operations and the limited oncological evidences have been the main factors that have favored the standard open techniques. Thus, while in the other surgical fields there has been a great shift towards minimally invasive approaches, this led to a slow development of minimally invasive approach for thymic tumors. Supporting this, Davenport, still in 2008, stated that there were insufficient data to evaluate the appropriateness of approaches other than sternotomy (4).

In recent years different authors described their experience with minimally invasive thymic surgery, particularly with standard VATS approach or with the robotic approach, showing satisfactory outcomes both from the surgical and oncological aspect. Despite no evidences are available, the role of the robotic approach has been emphasized for its apparent advantages over standard VATS technique (5). Indeed the improved dexterity of the robotic instrument, with their 7° of freedom that mimic the human wrist, the enhanced visualization through the 3D vision system and the introduction of dedicated instruments have favored the spread of this approach.

The above-mentioned characteristics of the robotic system have made it the ideal approach for high-trained surgeons to expand the indication of minimally invasive surgery to advanced stage thymoma.

Nowadays minimally invasive approach may be considered the preferable choice for early stage thymoma, particularly when associated to myasthenia gravis.

The ITMIG society has recently addressed this topic, giving terms, definitions and possible guidelines for surgeons when dealing with minimally invasive thymectomy (6).

First of all, the extent of the resection should involve the thymoma, the thymus and the mediastinal fat and extended thymectomy should be considered in case of myasthenic patients. Pointing out this aspect is extremely important as different studies show that the extent of resection may be in strict relationship with the surgical access. Indeed, a recent work by Burt and colleagues based on the ITMIG retrospective database, showed that the choice of the extent of thymectomy (total vs. partial) is influenced by the tumor dimension, surgical approach (open vs. minimally invasive) and the continent in which the operation is performed, with Asian patients more frequently undergoing to partial thymectomy through a minimally invasive approach (7). No evidences to date are available that show whether there are differences of relapse or survival rates between thymomectomy and thymectomy in non-myasthenic patients with early stage thymoma, but no controlled prospective randomized trial is now available. However, while robotic approach for thymomas is still being evaluated, a common approach should be followed to prevent additional bias. In case of advanced stage, thymectomy is mandatory.

Completeness of resection remains the main aim of surgery whereas incomplete resections are not considered acceptable for minimally invasive techniques and conversion is mandatory. Conversion to open is also required if any when oncologic principle is being violated as in case of perforation of the capsule, risk of a discontinuous resection or disruption of the tissues exposing the tumor.

Finally, thymomas should be resected using the so-called “no-touch” technique: the tumor should not be directly grasped or squeezed with retractors because of possible the rupture of the capsule and risk of pleural dissemination. Even if this makes resection more complex, it ensures an oncologically safe resection (6).

Considering the previous observations, robotic approach for advanced stages may be possible. Robotic technology has proven to be clearly superior to traditional VATS approach when dealing with challenging cases as obese patients (BMI >35), patients who underwent previous sternotomy or with atypical thymus gland or pectus excavatum (8,9). Moreover, the enhanced dexterity and the tremor filtering system allow a more precise and safe dissection around the delicate structures of the mediastinum, as nerves and great vessels (5).

According to the literature, there are 16 published studies with more than ten patients describing robotic thymectomy for thymoma (3,8,10-23). Among these, only seven articles deal with a minority of patients with advanced stage thymoma (13-15,17,20,21,23).

This because rarely there is a direct indication for robotic resection of a clinically advanced disease. Indeed, most of the patients approached with robot presenting advanced disease are clinical Masaoka I or II stage with an unexpected intraoperative upstaging. In these cases the decision to convert to an open access or to continue with the minimally invasive resection is based on the surgeon’s evaluation and experience. Wedge resection of the lung, resection of small tracts of pericardium or division of the phrenic nerve don’t represent a challenge in highly experienced centers. This individual choice should be based on surgical feasibility and oncological appropriateness.

Direct infiltration of the lung parenchyma in advanced stage thymoma must be distinguished from a simple adhesion of the tumor to the lung. However, in case with doubt infiltration of the lung, a simple wedge resection adjacent to the lesion may be performed (Figure 1). In case of more extensive infiltration, an anatomical segmentectomy or even a lobectomy can be performed. In recent years, concurrently to VATS lobectomy expansion, also robotic lobectomy or segmentectomy has gained attention and is now routinely performed in many centers (25). Therefore, from a technical point of view, the involvement of the lung parenchyma can be handled appropriately by a well-trained surgeon. However the dimension of the specimen, comprising the thymoma and the pulmonary lobe, may interfere with the endoscopic maneuvers and may need an enlargement of an access to be removed. As best practice, in case of doubt or risks of tumor breakage, open conversion is mandatory. 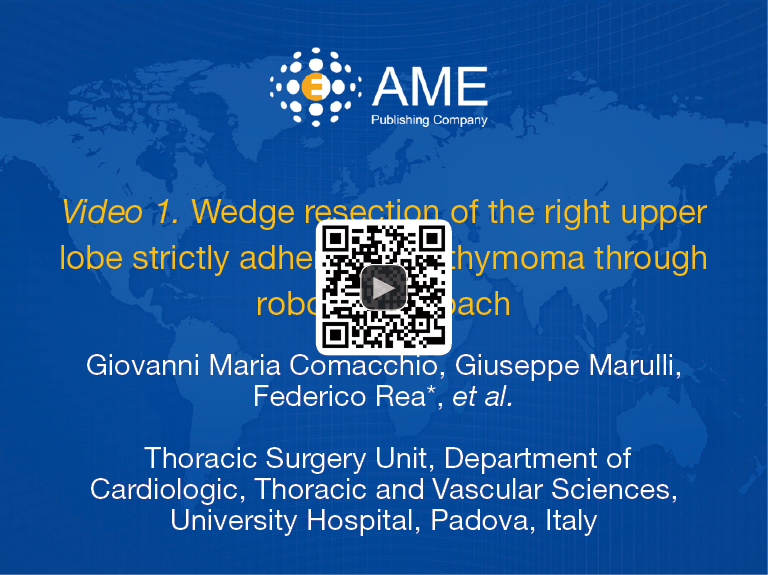 Because of its anatomical location, involvement of the phrenic nerve, particularly the left one, is not infrequent in thymomas (26,27). Nerve involvement may be detected preoperatively showing the clinical picture of hemidiaphragmatic palsy, or can be suspected from CT-scan images or finally may be detected only intraoperatively. In the latter case the tumor encases the nerve or it is strictly adherent to it without causing a diaphragmatic palsy. Resection of one phrenic nerve, especially if it is already involved, does not cause significant respiratory difficulty in the adult patient. A different attention should be observed in patients with myasthenia gravis that are at high risk to develop post-operative respiratory insufficiency. In these cases, some authors suggest the preservation of the phrenic nerve describing no significant differences regarding overall survival, but however a higher relapse rate (28).

According to ITMIG suggestions, phrenic nerve resection should be still avoided (6). Indeed, although technically feasible (Figure 2) according to these guidelines there are some aspects that are not clear, particularly the need of diaphragmatic plication and the possible attempts to preserve the nerve. 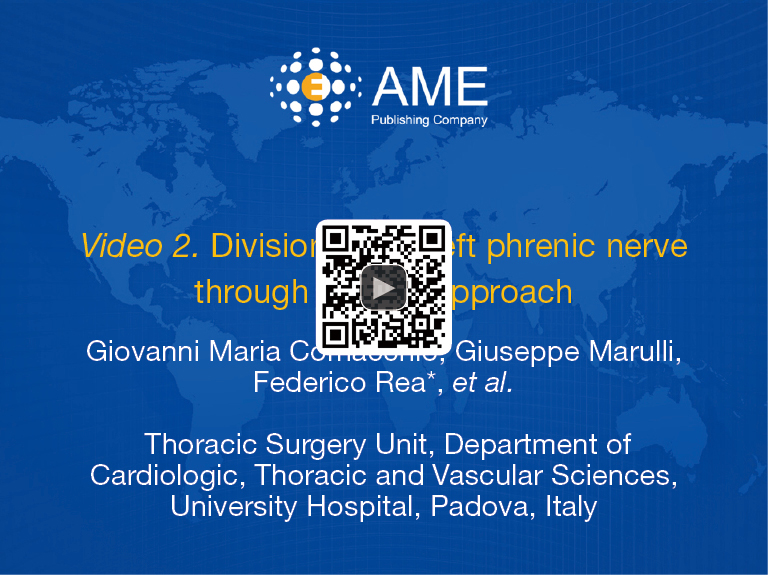 However in selected cases, as non-myasthenic patients with clear infiltration, this surgical procedure is feasible without particular difficulties by high trained surgeons. Furthermore, diaphragmatic plication-is not always necessary and may have limited benefits. Clinical signs of unilateral palsy are various, patients may be asymptomatic or may present dyspnea on moderate exertion or inability to sleep in a supine posture. Symptoms however may also improve over time (28). Diaphragmatic plication could be performed through a robotic approach (30). Clearly before the resection, all attempts to preserve the nerve must be performed, even conversion to open access if necessary, especially in patients with high risk of post-operative respiratory impairment.

Involvement of the great vessels

Infiltration of the mediastinal great vessels is not unusual in case of thymic advanced malignancies and is associated with poor prognosis (26). The infiltration of the innominate vein and superior vena cava are the more common findings, whereas involvement of the aorta, the aortic branches and of the pulmonary artery are rarely seen. Infiltration may be directly radiologically detected or may be suspected (e.g., right diaphragmatic palsy and superior vena cava infiltration). In some cases, the tumor encases the vessels completely or partially without invasion but making necessary the resection and/or the reconstruction of the vessel. Minor vascular invasions may be detected only intraoperatively. ITMIG consensus stated that vascular involvement is a contraindication to minimally invasive approach, either if diagnosed preoperatively or intraoperatively (6). Although robotic resection and reconstruction of pulmonary vessels has been described through robotic approach for lung cancer (31), to date no study has reported similar procedure on the mediastinal vessels. Moreover, the location of these vessels makes the endoscopic maneuvers of resection and anastomosis particularly difficult compared to the pulmonary vessels.

Masaoka stage IVa disease is defined as the presence of pleural spread. In these cases, the role of surgical resection remains in question. Clinical and radiological presentation is very heterogeneous, with some cases showing only one or few well-defined and localized pleural lesions, while others have a diffuse pleural involvement or a combination of pleural and pulmonary spread. Consequently, the surgical resection varies from extrapleural pneumonectomy to total pleurectomy to local pleurectomy. The extent of the resection is mainly based on the tumor burden and on the surgeon’s evaluation and the aim consist in a more complete resection as possible (32). However, some authors point out that is virtually impossible to achieve an R0 resection in stage IVa (33).

In case of clinical diagnosis of stage IVa pre-operative chemotherapy is performed to increase the R0 rate. In these cases, a minimally invasive approach is clearly not indicated.

In some patients a single or limited number of pleural lesions may be detected intra-operatively. In these cases, the minimally invasive resection of the metastases is technically feasible and indicated, as the indication would not change moving to an open approach. Exploration of all the pleural space is mandatory in cases where there is the suspicion of a thymoma and particularly in cases where the tumor projects into the pleural space (6). Paradoxically, pleural exploration may be more precise through a minimally invasive approach than through a standard open technique as median sternotomy.

Robotic approach may be indicated for advanced stage thymoma in highly experienced centers. With the improvement of the robotic surgical technique and the introduction of dedicated instruments, challenging resections may be possible. However, before expanding the surgical boundaries, indications and outcomes of robotic resection of early stage thymomas must be clearly established and the robotic approach for advanced stages should be still considered experimental and limited to high volume centers.