A bronchogenic cyst (BC) is a benign lesion originated from a defective growth of the lung bud.

It is located in the mediastinum in approximately two thirds of cases and it represents the most common cystic lesion in the mediastinum. In 15–25% of cases, BCs arise from pulmonary parenchyma, but they can also originate in different sites (neck, abdomen, heart, central nervous system) (1-5).

The histological features consist in a lining of respiratory type epithelium, characterized by cilia and mucus production.

Because it can be asymptomatic, it is not easy to evaluate the correct prevalence of BC: in two case series it has been estimated in around 1:42,000 and 1:68,000 admissions (6). However, with the increasing use radiological examinations, the incidental finding of BC has raised, and its incidence increased. BC is more frequent in male patients and on the right side; the cyst is usually unilocular and it may contain internal septa and clear or turbid fluid or mucoid material.

The location of BC depends on the time of abnormalities’ onset during embryonal lung development from the ventral foregut, which is between 26th and 40th day of gestation; if it occurs early, the cyst is located in the mediastinum, while if it develops later during gestation, the cyst is located peripherally within the lung parenchyma itself, where it often has a clear bronchial communication. In a multicenter Canadian series of 86 patients (7), 66 had a mediastinal BC (22 in middle mediastinum, 43 in the posterior and 1 in the anterior mediastinum); in lung BC, the majority (65%) of cysts were located in the lower lobes (left lower lobe, 7; right lower lobe, 6), but they were also found in every other lobe (left upper lobe, 3; right upper lobe, 3; middle lobe, 1). In pediatric age, BCs are often seen as emergencies (8,9), sometimes fatal, with atelectasis, air trapping and respiratory insufficiency caused by airway compression by the cyst. In adults, BCs are often asymptomatic, but patients can suffer from symptoms deriving from the compression of surrounding structures, such as tachycardia, dysphagia, dyspnea, cough and chest pain.

The most common complication of BC is the infection of the cyst, that causes fever, dyspnea and sputum production if the cyst communicates with a bronchus. In literature, other rare but life-threating complications have been reported, such as cyst rupture, air embolism (10,11) and malignant transformation (12).

Actually, the real risk of cancer development from the cyst wall is debated: in many of these cases, the precise relationship of the malignancy with the cyst is unclear and this risk appears minimal because it is difficult to distinguish between lung carcinoma with a cystic component and a BC in which carcinoma develops (13).

Until now, only bronchoscopy, mediastinoscopy, or percutaneous CT-guided methods have been performed to drain and decompress complicated BCs in their acute phase: this is due to the fact that severe inflammation of the cyst and consequent adhesion to surrounding vital organs would make surgical excisions risky and potentially incomplete; an incomplete removal of the cyst would cause a higher recurrence of the pathology, but also drainage is not considered as a definitive treatment for cysts, especially if complicated.

In this paper we present a case of recurrence of BC after drainage and its final resolution by excision in video-assisted thoracoscopic surgery (VATS) uniportal surgery.

A 68-year-old woman presented at our emergency room at the beginning of December 2017 for the worsening of a thoracic pain localized in the right interscapular-vertebral region that she had already been complaining for the last 10 days, during which she also experienced fever that didn’t benefit from antibiotic therapy.

Anamnestic data were collected; vital parameters and electrocardiography were normal. Blood tests documented an increase in the phlogosis indices (c-reactive protein was 201 mg/dL, procalcitonin negative). No neutrophil leukocytosis was found.

The patient reported a previous hospitalization in August 2017 due to the same symptoms caused by a right hydropneumothorax treated with the positioning of a pleural drainage and antibiotic therapy.

The revision of the radiological images of the previous admission confirmed the previous episode of right hydropneumothorax (Figure 1) and its partial resolution after placement of pleural drainage (Figure 2). The radiological examination performed 15 days after discharge of the first admission documented good resolution of the effusion (Figure 3). 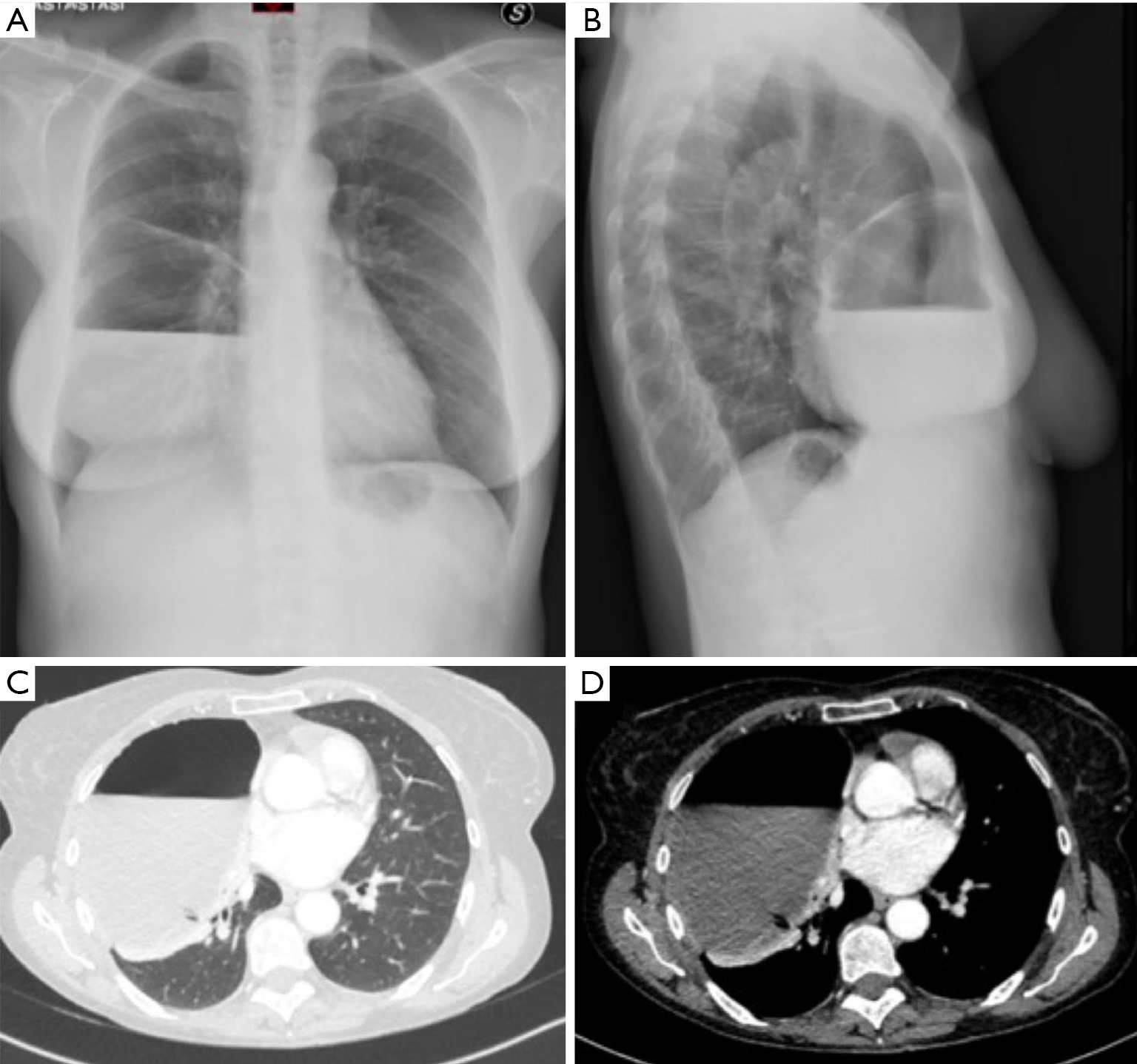 Figure 1 Antero-posterior (A) and latero-lateral (B) chest X-ray of the patient, with visible right hydropneumothorax; axial thorax CT image in lung (C) and mediastinum (D) windows. 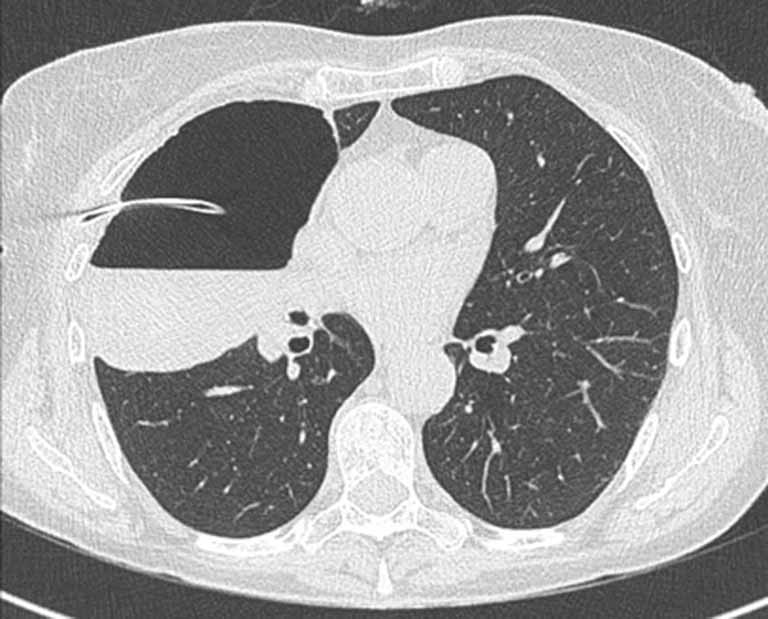 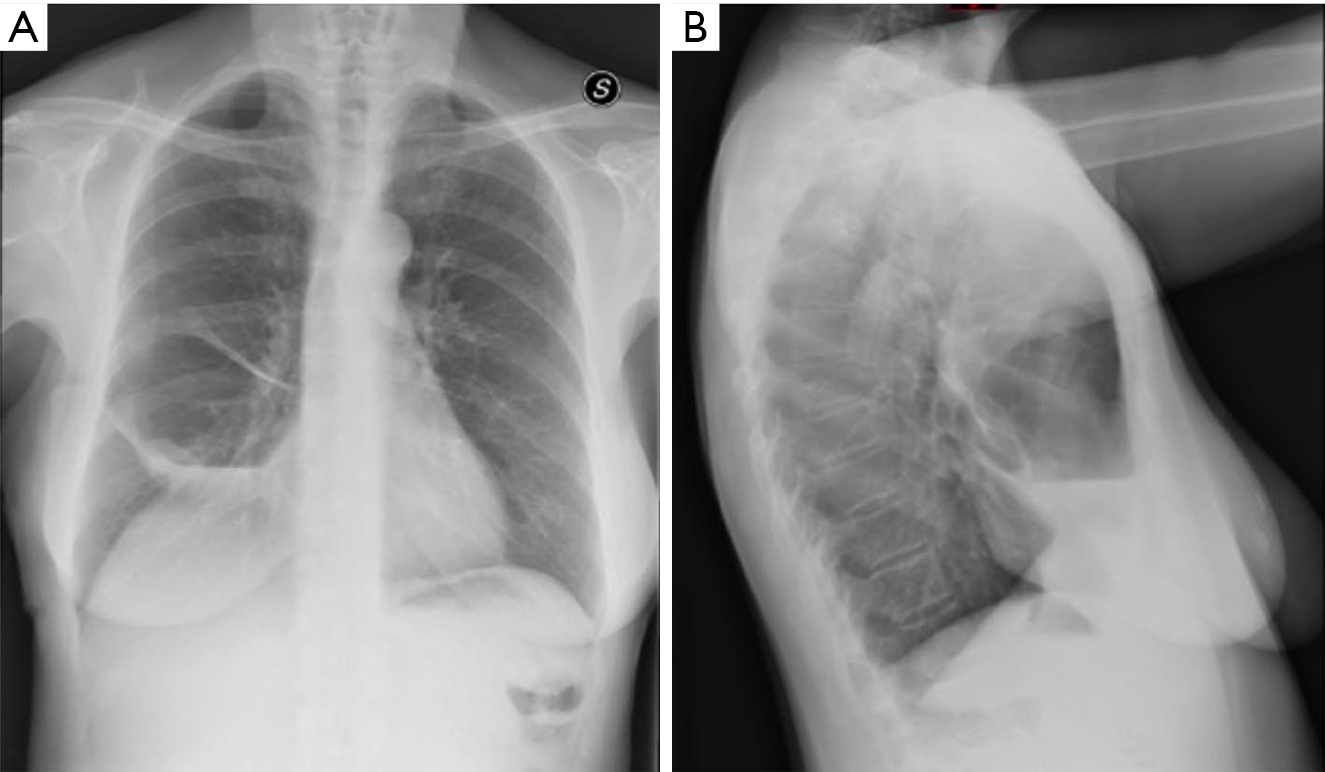 Figure 3 Antero-posterior (A) and latero-lateral (B) chest X-ray of the patient after first drainage and discharge. 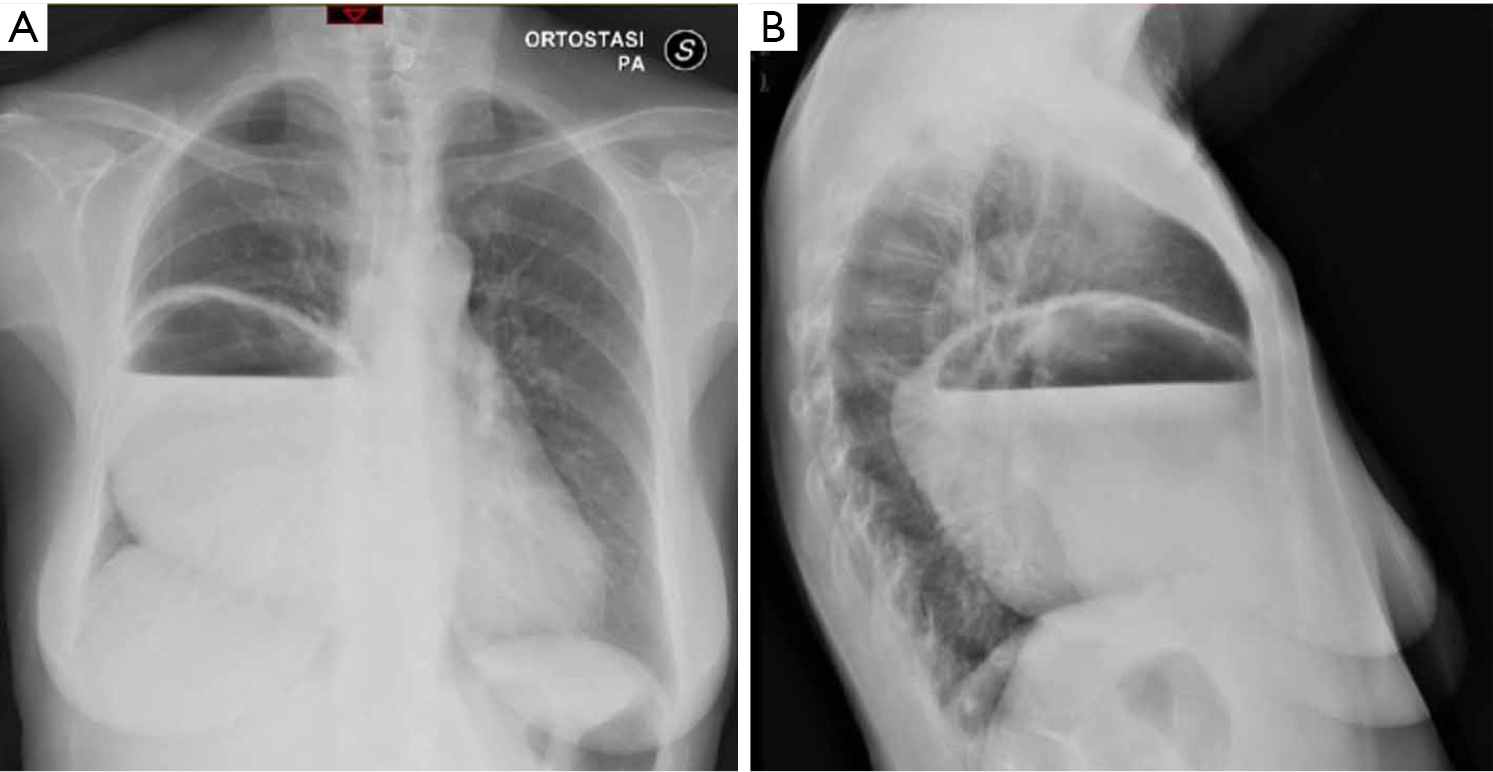 Figure 4 Antero-posterior (A) and latero-lateral (B) chest X-ray of the patient after second presentation at the Emergency Room.

A second level examination was then performed with a thoracic CT scan, which documented the presence of a formation with a partly dense fluid content, with a gross hydro-air level in the context, which occupied the antero-inferior portion of the right hemithorax (maximum dimensions 14 cm × 9 cm × 10 cm), resulting in complete atelectasis of the middle lobe and part of the inferior lobe (Figure 5). 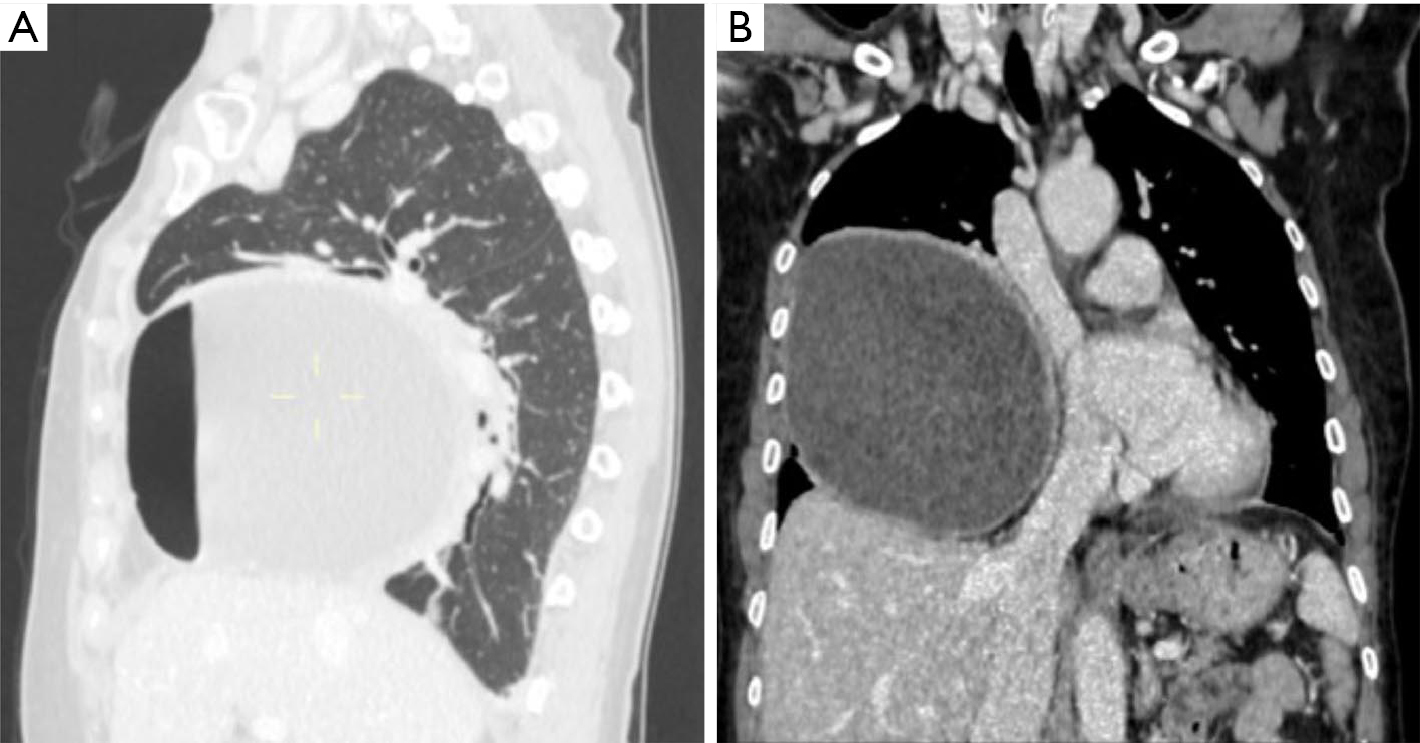 Figure 5 CT images of recurrence of bronchogenic cyst. (A) Sagittal CT thorax scan (lung window) describing the presence of a formation with a partly dense fluid content and a gross hydro-air level, suspect for a saccate empyema or a complicated bronchogenic cyst. (B) Coronal CT thorax scan (mediastinal window, portal phase) showing compression of the other mediastinal structures.

The CT scan placed the suspicion of a saccate empyema or a complicated BC.

Pulmonary ultrasound documented, in correspondence with the suspected complicated BC, the absence of lung pulse and the presence of pleural sliding; it also confirmed the presence of a corpuscular effusion (Figure 6). 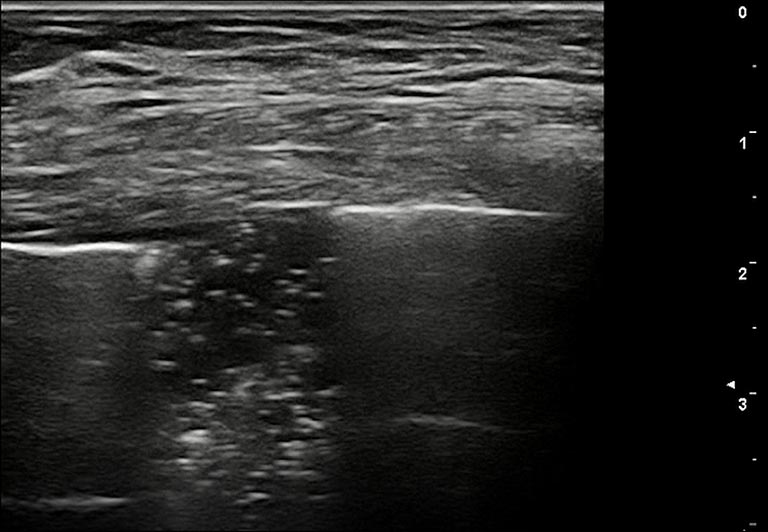 Figure 6 Right hemithorax ultrasound image showing parietal and visceral pleura. The corpuscular effusion, with hyperechogenic spots, is documented under the layer of the visceral pleura indicating its intrapulmonary origin.

Therefore, ultrasound findings confirmed the diagnosis of a complicated BC. The case was then discussed jointly with the pneumologists and the patient was subject to a first cycle of antibiotic therapy (4 grams piperacillin/0.5 grams tazobactam), bronchoscopy for broncho-aspirate lavage (BAL) (which resulted negative for aerobical and anaerobic bacteria and for mycetes) and to successfully exclude cyst communication with a large bronchus.

The procedure was performed under general anesthesia and single lung ventilation, using a double-lumen endotracheal tube. The patient was then placed in right lateral decubitus position.

A single 4 cm muscle-sparing incision was performed at the right 5th intercostal space on the mid axillary line (Figure 7). Incision widening and protection for the introduction of a 10 mm 30° thoracoscope and endoscopic instruments was obtained through a wound protector. 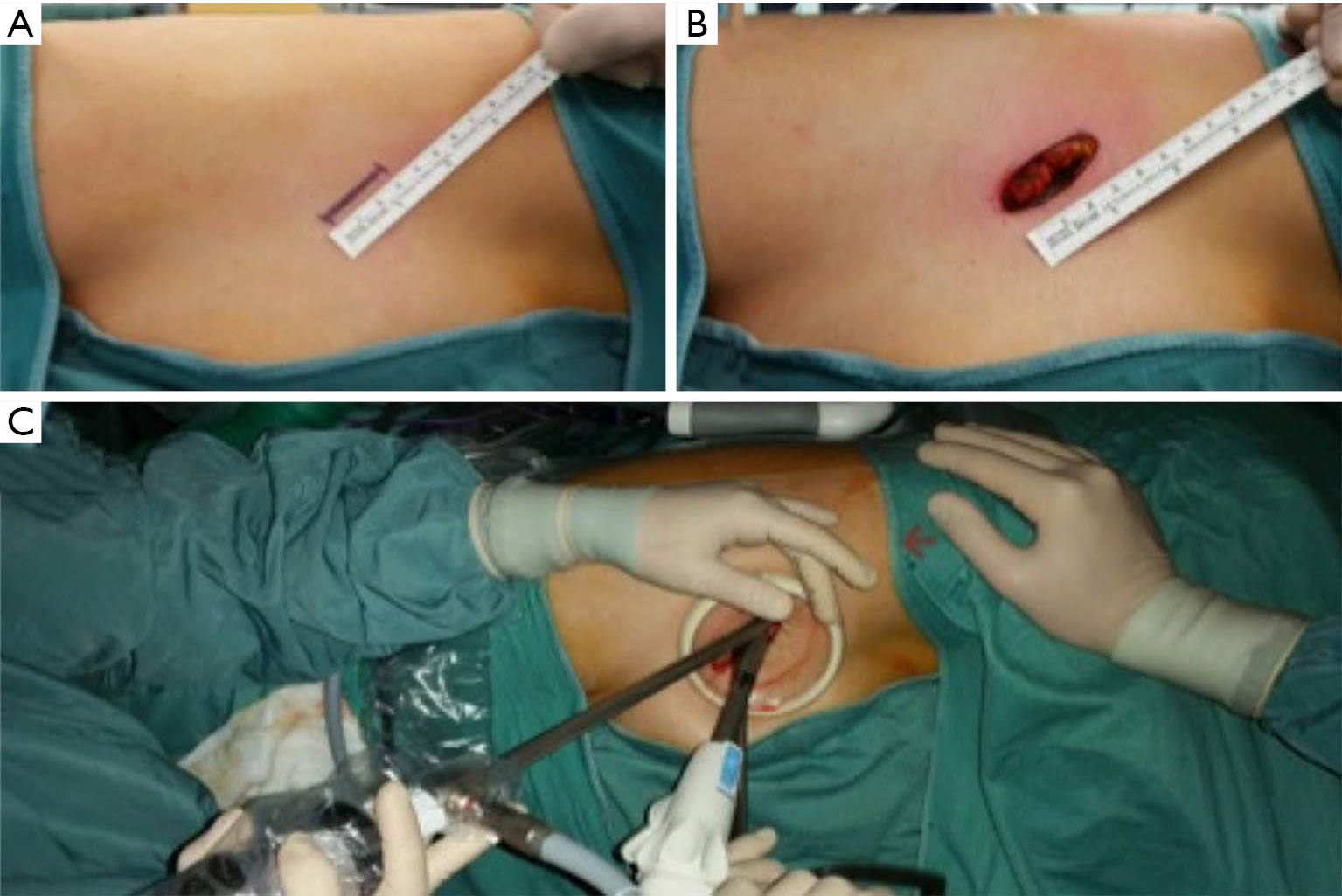 Figure 7 Dimensions (A) of the uniportal-VATS incision (B). (C) Intra-operative setting of surgical instruments.

The exploration of the pleural cavity confirmed the presence of a voluminous pulmonary cysts that presented thickened walls, a maximum axial size of 13.3 cm × 11 cm and cranio-caudal size of 11 cm, and tenacious adhesions to lung parenchyma, mediastinal pleura and diaphragm pleura. The size of the cyst, tense and filled with purulent effusion, did not allow an accurate exploration of the pleural cavity and an operative space such as to allow surgical intervention. It was therefore decided to aspirate the content of the cyst in order to reduce its size. One thousand cc of purulent pouring was aspirated and sent for cytological and cultural examination (resulting negative). The solution was then continuously closed, so as not to contaminate the pleural cavity with the purulent contents of the cyst. Adhesive lysis was then carried out until complete mobilization of the cyst, which appeared to belong to the lateral segment of the middle lobe. The cyst was then completely removed on multiple charges of a mechanical stapler by atypical pulmonary resection of a portion of the lateral segment of the middle lobe. Finally, abundant washing of the pleural cavity was performed and the subsequent hydro-pneumatic re-expansion test resulted negative.

One pleural drainage 28 Fr has been placed through the wound.

The patient was discharged on the 12th post-operative day (Figure 8).

Figure 8 Antero-posterior (A) and latero-lateral (B) chest X-ray of the patient before being discharged on the 12th post-operative day.

Recent years’ evolution of standard multiport VATS into a uniportal approach (14,15), with benefits for the patient in terms of less post-operative pain and faster recovery, lead us to choose the uniportal-VATS (U-VATS) technique for our patient.

This minimally invasive approach enabled the patient to avoid the need for post-operative intensive care. The muscle sparing incision of the uniportal VATS and the consequent reduction of post-operative pain allowed to start an early post-operative respiratory physiotherapy that facilitated the re-expansion of those parts of the lung parenchyma that were atelectasic for months.

As far as we know, it is the first case of a complicated BC removal in U-VATS.

U-VATS for the treatment of this case was safe and effective with good outcomes in terms of post-operative recovery.

Further prospective and randomized studies (U-VATS vs. traditional VATS) on wider series of patients would be desirable to better define the role of minimally invasive techniques in a particular pathology such as complicated BCs.

Ethical Statement: The authors are accountable for all aspects of the work in ensuring that questions related to the accuracy or integrity of any part of the work are appropriately investigated and resolved. Written informed consent was obtained from the patient for publication of this manuscript and any accompanying images.