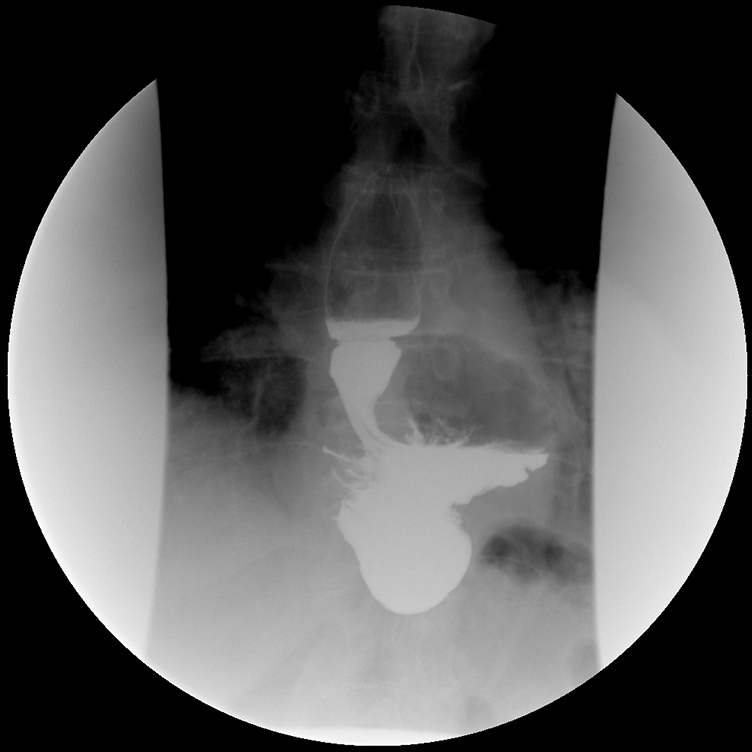 Surgical management of failed fundoplication is one of the most challenging foregut operations. These patients require extensive pre-operative assessment which includes review of prior operative records, a detailed history and physical examination, blood work including nutritional parameters, barium esophagram, endoscopy, and manometry. In select cases, a gastric emptying study and computed tomography (CT) may be warranted.

Patients are placed on a clear liquid diet for 2 days prior to operation, and given a 1L polyethylene glycol electrolyte solution as a modified bowel prep. In the preoperative holding area, patients are given 5,000 units of heparin subcutaneously for venous thrombo-embolism (VTE) prophylaxis. Arterial monitoring is important in order to identify hemodynamic instability from possible capnothorax resulting from mediastinal dissection. Once the patient is positioned supine on the operating table, the arms are abducted to a 45-degree angle, and a foot board is placed to support steep reverse Trendelenburg. The surgeon is positioned to the right of the patient, with the assistant on the left.

The abdomen is entered away from any previous incisions, usually in the right upper quadrant (RUQ), using a blunt port and cut down technique. Once the abdomen is insufflated to 15 mmHg, a 5 mm 30-degree camera is introduced and the abdominal cavity is inspected. The remaining ports are placed under direct visualization. Five ports are generally required to perform the procedure (Figure 2); one port at each subcostal midclavicular line, one paramedian port through each of the rectus muscles midway between xiphoid and umbilicus approximately 4 cm apart, and one subcostal right midaxillary line. All ports are 5 mm ports aside from the 10 mm right paramedian port. The patient is then placed in steep reverse Trendelenburg and a liver retractor (Lapro-Flex Triangular Retractor, Mediflex, Islandia, NY, USA) is introduced through the right midaxillary port to expose the right crus. 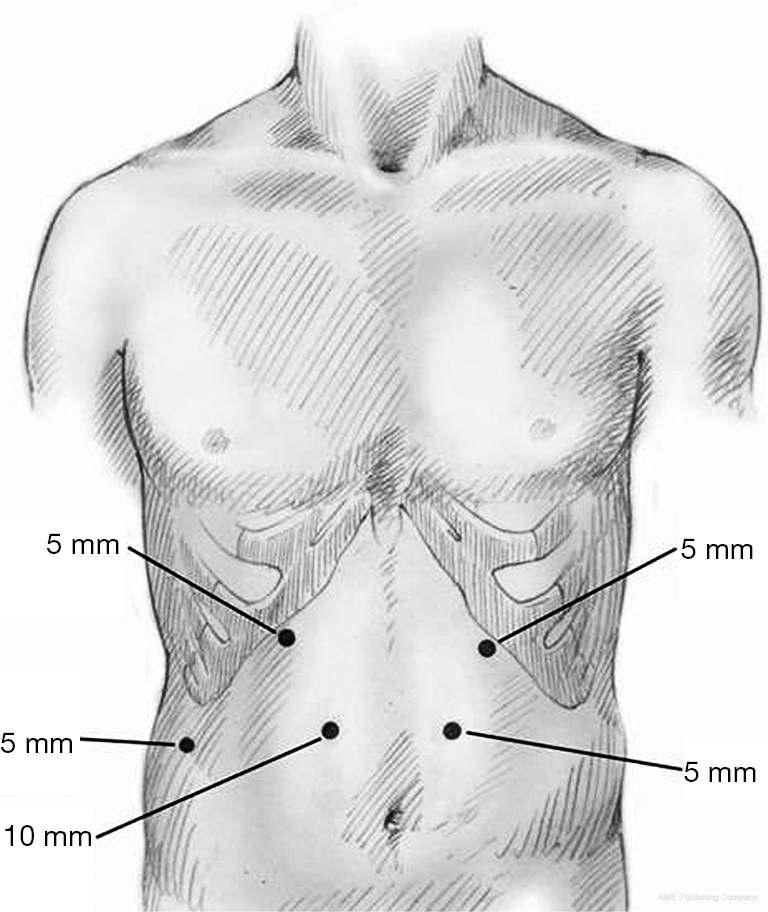 The surgery begins with sharp dissection of adhesions between the liver and prior fundoplication. The caudate lobe is a key landmark which will aid in identification of the right crus. Once the right crus is identified, sharp dissection is continued to enter the mediastinum. This allows for safe identification of the esophagus and vagus nerves. It is imperative that the crural lining is preserved, as this aids in primary crural closure. If there was mesh used during the index operation, it is important to fully excise this in order to fully expose the hiatus. Once adequate dissection has been performed the hernia contents are then reduced. The right crus is completely mobilized from the caudate lobe if not done so previously. The left crus is dissected in a similar fashion, completely mobilizing free from the spleen. This will aid in tension free, primary crural closure.

If a large paraesophageal hernia (PEH) is present, the sac is identified and grasped within the hiatus at the 12-o’clock position and everted. A hemostatic energy device is then used to create a window between the hernia sac and the anterior peritoneal lining. This maneuver should expose an avascular areolar plane which will allow for dissection within the mediastinum along the posterior pericardium. Dissection within this plane should be carried up to the inferior pulmonary veins. The dissection is then carried out circumferentially to the level of the pleural lining bilaterally. The mediastinal dissection is then carried out posteriorly between the esophagus and the aorta, ensuring adequate mobilization between these structures as well. Once circumferential dissection of the esophagus is accomplished, mobilization of the right and left crura should be completed if not already achieved.

After complete mediastinal and crural mobilization, the previous fundoplication is taken down and normal anatomy is restored. This will not only allow for the assessment of the optimal type of repair but will often suggest the cause of failure of the index operation. Dissection is generally started along the left limb of the wrap, carefully sweeping away tissue centrally in order to avoid injuring the anterior vagus nerve. Removal of the fundoplication sutures should be approached from the undersurface of the wrap. Dissection of the right limb of the wrap is performed in the same manner. The short gastric vessels should also be divided completely if not already done. Adhesions to the stomach should be addressed, taking care to mobilize the posterior gastric attachments as well. Adequate mobilization of the stomach will allow it to lay in its normal anatomic position and will allow for the fundic tip to be easily lifted without resistance. 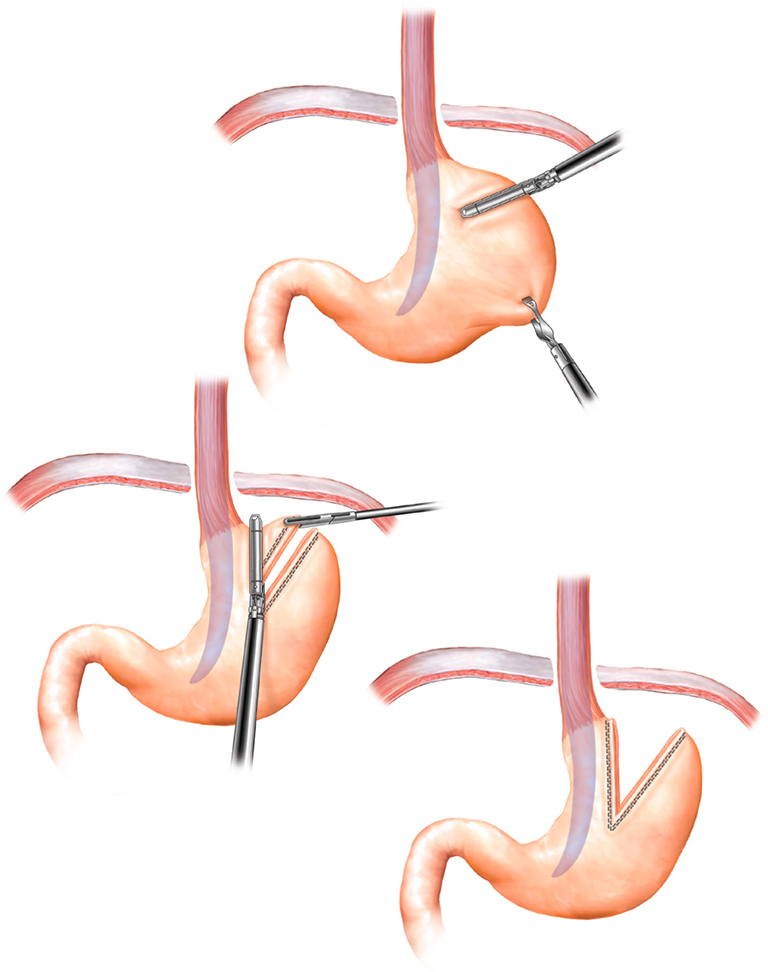 Once normal anatomy is restored and the GE junction fat pad is dissected, it is imperative to perform an on-table endoscopy to rule out any inadvertent esophageal or gastric perforation. If any injury is identified, it should be repaired at this time. If there is extensive damage to the esophagus, GE junction, or stomach, the surgical plan may need to be altered accordingly. Once endoscopic evaluation is complete, the type of surgical repair is then determined based upon objective preoperative work-up, patient characteristics, and intra-operative findings.

The preferred approach is a tension-free primary closure. Preservation of the crural integrity is essential for optimal outcome. Two to three interrupted 0 non-absorbable sutures are used to approximate the crura posterior to the esophagus (Figure 4). An anterior stich may also be required in certain instances. Very large defects pose a significant challenge to primary crural closure. Reducing the intra-abdominal pressure often aids in achieving a tension free repair. Another maneuver is inducing a left sided pneumothorax with close hemodynamic monitoring. Once the primary crural repair is achieved, a grasper is introduced through the hiatus to ensure an approximately 1 cm space around the esophagus. If tension free primary closure of the crura cannot be achieved or if the crural integrity is compromised, a biologic mesh can be used to close the defect. The mesh is secured to the diaphragm using 2-0 non-absorbable suture and a tacking device. Delayed erosion of non-absorbable mesh into the esophagus is a major concern, so its use should be avoided at all costs. 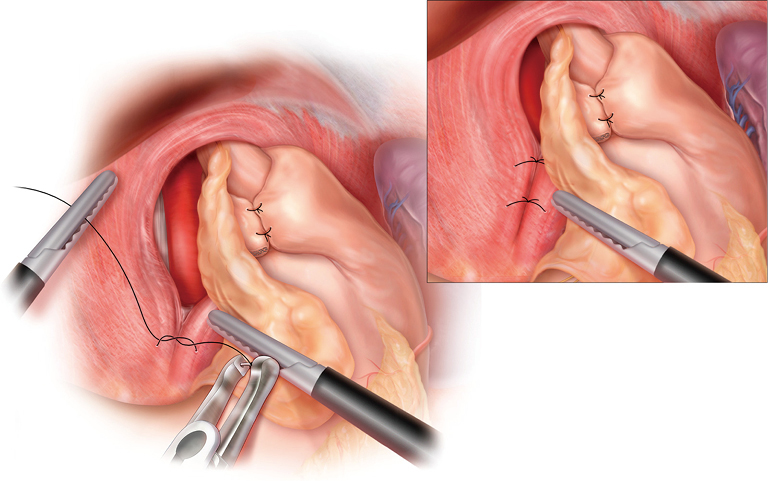 After crural repair, a redo fundoplication is performed in the following matter. A 52 to 56 Fr bougie is delivered trans-orally by the surgeon and positioned along the lesser curvature. If a Collis is required, it is completed at this time with the bougie in place (Figure 3). The fundus is passed, left to right, through the retroesophageal window, maintaining proper orientation using the line of the divided short gastric vessels. The “shoe-shine” maneuver is then performed confirming the proper orientation. The fundoplication is then secured using 2 simple interrupted 2-0 non-absorbable sutures. Each stitch should consist of a full thickness bite of stomach flanking a partial thickness bite of esophagus to prevent wrap herniation (Figure 5). The bougie is then removed after completion of the fundoplication followed by placement of nasogastric tube (NGT) under direct laparoscopic visualization. In cases where the patient has severe esophageal dysmotility, a partial wrap may be preferable. 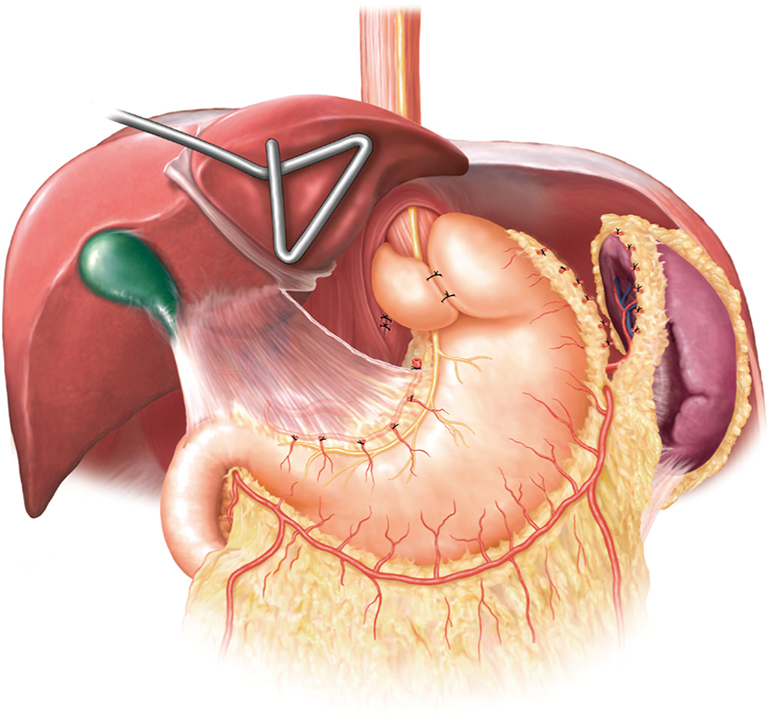 There is a certain subset of patients in whom redo-fundoplication may not be suitable, and these patients would benefit from a RNYNEJ. In these situations, once the normal anatomy is restored, a RNYNEJ is performed in the standard fashion with certain key elements to consider (10). Additional laparoscopic ports will be required to aid in the anastomoses. When constructing a RNYNEJ, it is important to have a small gastric pouch consisting of only cardia to minimize acid production. The Roux limb can vary between 60 to 100 cm based on body mass index. It is typically positioned retrogastric and retrocolic. The proximal anastomosis is performed using a preloaded anvil on an orogastric tube (Orvil, Medtronic, Minneapolis, MN, USA) and an EEA stapler (Medtronic, Minneapolis, MN, USA) (Figure 6) while the distal anastomosis is constructed with a linear GIA stapler (Medtronic, Minneapolis, MN, USA). All potential defects are closed. Typically, a JP drain is placed behind the proximal anastomosis, and in select cases a decompressive gastrostomy tube is considered. If the cardia is not suitable for anastomosis, then an esophagojejunostomy should be performed (Figure 7). 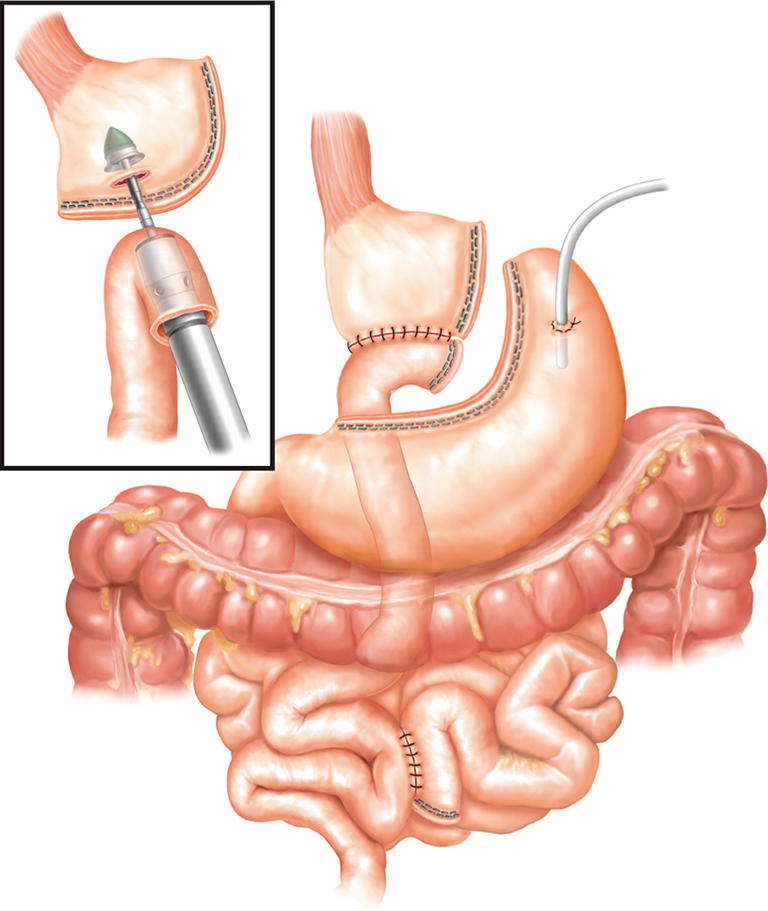 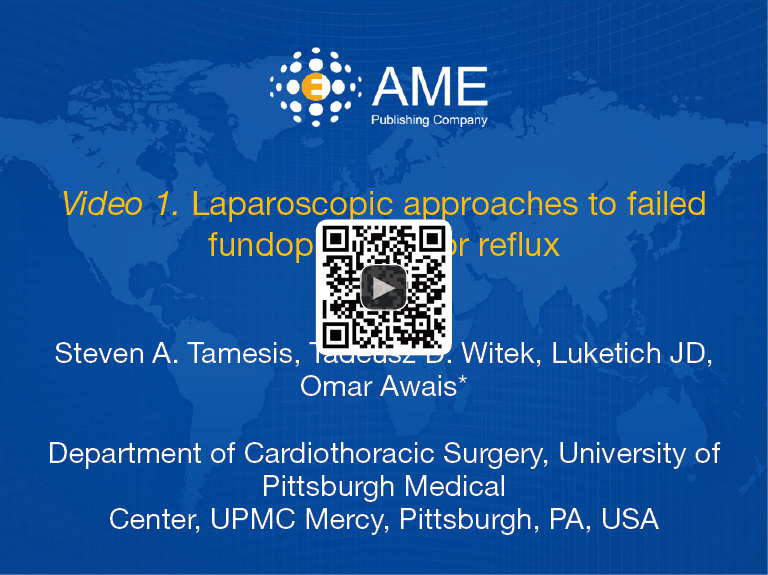 In cases where the esophagus is severely diseased, damaged, or devascularized, esophagectomy may be the only viable option. Our preference is to complete a minimally invasive Ivor Lewis esophagectomy, which we described previously in detail (12) (Figure 8). A gastropexy may be of benefit in limited circumstances in situations where the esophagus is preserved, however, the fundus is not suitable for a fundoplication. If constructing a gastropexy, we prefer to tack the stomach to the diaphragm rather than use a gastrostomy tube as a form of pexy. We construct the gastropexy by suturing the stomach along the divided short gastric line to the diaphragm using a series of horizontal mattress sutures. The stomach is oriented laterally toward the spleen in order to recreate its natural position. 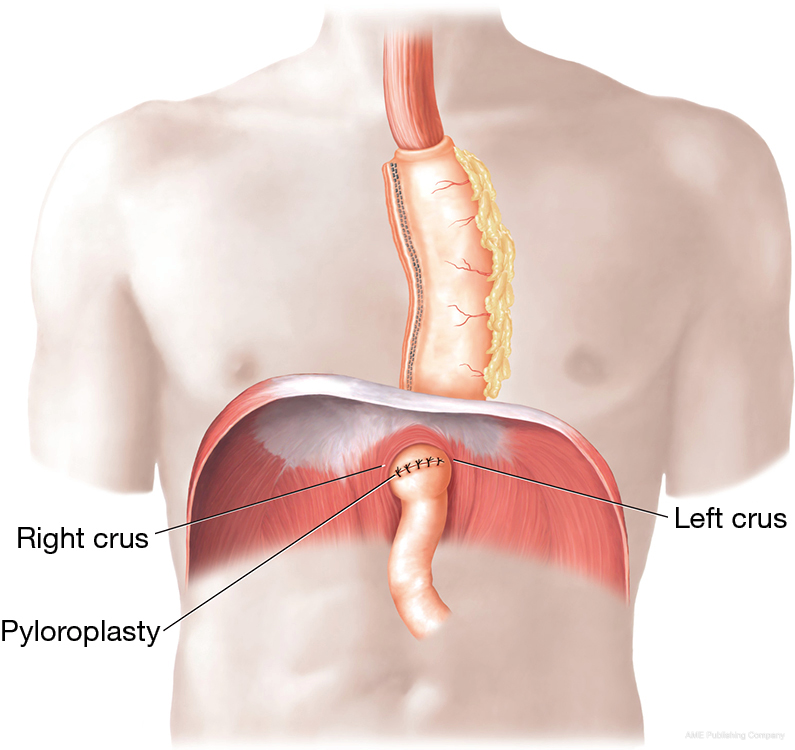 Experience with RNYNEJ is also well documented by another study performed at the University of Pittsburgh. One hundred five patients with BMI greater than 25 underwent RNYNEJ for failed anti-reflux operations. Most were obese [BMI >30; 82 patients (78%)], and esophageal dysmotility was demonstrated in more than one-third of patients. Forty-eight (46%) patients had multiple anti-reflux operations before RNYNEJ, and 27 patients had undergone a previous Collis gastroplasty. There was no perioperative mortality. During follow-up (mean, 23.39 months), median BMI decreased from 35.0 to 27.6 (P<0.0001), and the mean dysphagia score decreased from 2.9 to 1.5 (P<0.0001). The median GERD HRQOL score, assessed in a subset of patients, was classified as excellent (21). This study not only showed that RNYNEJ is a viable and effective alternative to fundoplication in the correct setting, but also showed benefit for patients with obesity, and esophageal dysmotility. Other studies have also demonstrated the effectiveness of Roux-en-Y reconstruction after failed fundoplication in regards to GERD symptom control (10,22-24). Another study by Juhasz et al. demonstrated that Roux-en-Y reconstruction produced significantly better results for patients with a short esophagus compared to a redo Collis gastroplasty (19).

Another option for carefully selected patients is the use of a gastropexy. Ideal patients for this procedure are those with minimal reflux history as this procedure may put the patient at risk for reflux. Instances where this procedure may be appropriate are for patients with multiple and significant comorbid conditions, elderly patients, patients with significant esophageal motility disorders, or when the viability of the fundus is in doubt. In these instances, a gastropexy may offer a better functional outcome however further investigation of outcomes after gastropexy are needed before any definitive conclusion can be made.