Each year in the United States, 17,000 cases of esophageal cancer are diagnosed resulting in over 16,000 deaths (1,2). In the U.S. adenocarcinoma comprises more than 60% of esophageal cancers and the incidence continues to rise, the major risk factors include smoking and excessive alcohol consumption (3-5). Esophagectomy remains a mainstay in the treatment of esophageal cancer (6). Esophagectomy is used as a first line intervention or following neoadjuvant therapy, complications occur as high as 80% in low volume centers (7,8). In an attempt to minimize those complications many surgeons have utilized minimally invasive esophagectomy (MIE) and other modifications of the surgery in the hopes of further minimizing risks (9). Common complications include anastomotic leaks, strictures, recurrent laryngeal nerve injury, dysphagia, gastric outlet obstruction and aspiration. Anastomotic leak is a particularly morbid complication occurring in up to 40% of patients with a mortality as high as 12% (10-12).

It is well established that delayed emptying is associated with morbidity resulting in increased length of stay due to complications including dysphagia and poor nutritional intake which ultimately impair long-term quality of life (13,14). As such, it is common practice to perform a drainage procedure of the pylorus to prevent delayed gastric emptying. Techniques such as botulinum toxin injection, balloon pyloroplasty and pyloromyotomy have all been examined. The literature is largely inconclusive in determining which technique is superior (15-19). Prior to this study literature regarding the combining of pyloric drainage techniques is absent. We sought to examine our experience of combining botulinum toxin with balloon dilation to reduce the incidence of gastric outlet obstruction.

In this single institution (Albany Medical Center, Albany, NY, USA) retrospective study, data was gathered from 2010 to 2016 on patients with esophageal cancer or high-grade dysplasia who underwent minimally invasive esophagectomy (MIE) consisting of laparoscopy and thoracoscopy. The study methods and data collection were approved by the Committee on Research Involving Human Subjects (IRB) protocol number 4314. Exclusion criteria included patients who did not receive Botox, pyloric dilation, or an esophagram, as well as patients who underwent esophagectomy for benign disease or were unable to undergo a minimally invasive approach.

Data collection included age, gender, diagnosis, length of stay and diet tolerated at time of discharge. The post-operative esophagram was read by radiologists blinded to drainage procedure and data was collected with particular attention to any mention of delayed emptying, retained contrast, anastomotic leak, and reflux. The severity of dysphagia in these patients was quantitatively measured using a dysphagia score (Figure 1, Table 1). 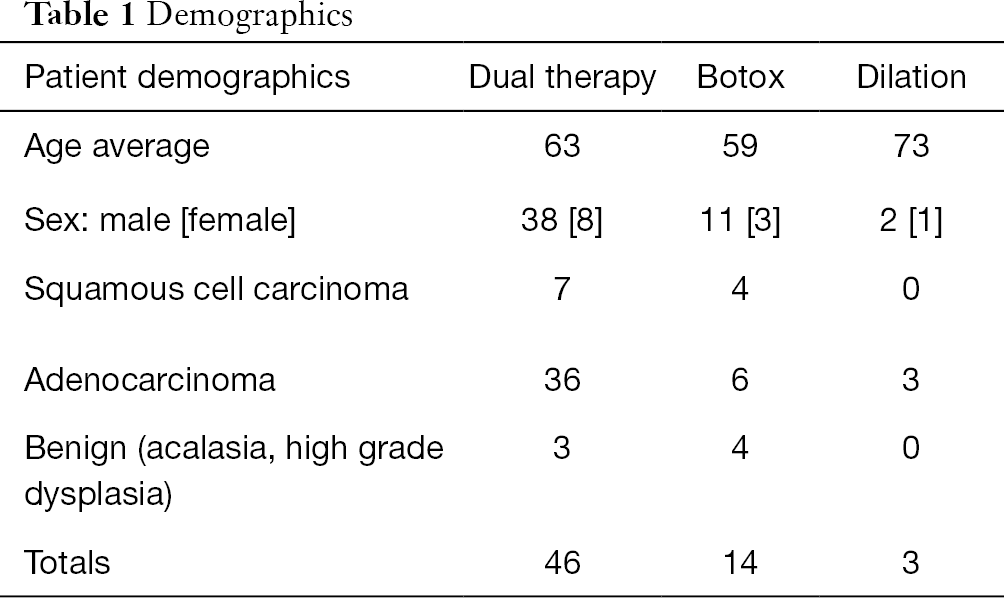 The injections and the dilations were performed during the MIE. The balloon dilation was performed endoscopically using a 20 mm CRETM balloon dilator following induction of general anesthesia. The balloon was inflated to six atmospheres for a duration of 5 minutes. The Botox injection was completed after mobilization of the conduit. Two hundred units of Botox mixed in 5cc of normal saline were injected into the pylorus via an extraluminal approach as we have previously described (9).

Sixty three patients met the inclusion criteria and thus underwent retrospective chart review. The dual therapy group included 46 (73%) patients. The single therapy group included 17 (27%) of which 14 (22%) received Botox alone and 3 (5%) underwent dilation alone. The average age of patients in this study was 63; 75% of whom were males. The majority (75%) of pathology was adenocarcinoma (Figure 2). 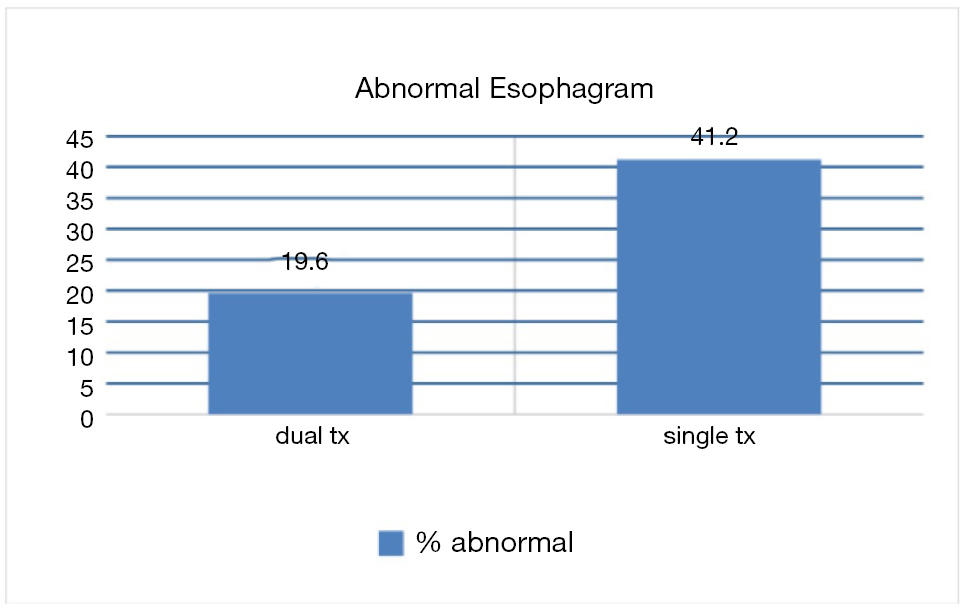 Regarding nutritional supplement, 27 of 46 patients (59%) of the dual therapy group had the feeding tube removed at the first post-operative visit versus 7 of 17 (42%) patients in the single therapy group (P=0.22) (Figure 4). 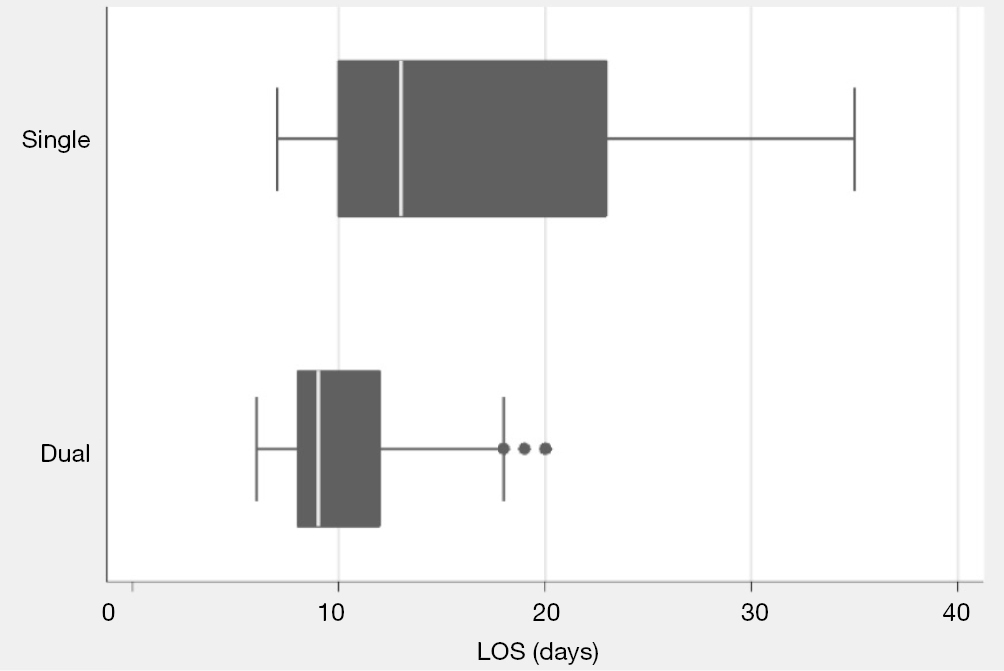 Delayed gastric emptying can lead to aspiration, dietary restrictions, dysphagia and reflux. These issues alone or in combination can complicate the post-operative course, increase length of stay, and worsen quality of life. No gold standard exists, and the literature is inconclusive regarding ideal management of the pylorus. Our study sought to assess the benefit of dual pyloric drainage procedures (9,17-22).

Although benefits have been demonstrated from emptying procedures it remains difficult to define absolute benefit. Simply performing an emptying procedure does not ensure prompt emptying. Many variables exist which may influence emptying postoperatively, most notably conduit size, denervation of the vagus, and hiatal obstruction. In our institution we have chosen to continue performing drainage procedures. In 2007 we initially published our data using botulinum (5). In 2009 we published a larger series of botulinum toxin injection and demonstrated 43 of 45 (96%) had no delayed gastric emptying (9,18,19). Two patients had delayed gastric emptying both requiring intervention before discharge. There was one aspiration event in the entire group. During this study we recognized the value of prompt emptying and also that Botox can fail. The current study added balloon dilation in the hopes of further optimizing emptying and reducing failure of Botox injection alone.

Miller et al. reported a large retrospective series with open procedures and found no difference in emptying between the three groups pyloroplasty, pyloromyotomy, and botulin toxin injection (P=0.14) (28). The study found that Botox injection was associated with shorter operative time but an increase need for repeated endoscopy.

We utilized esophagram, obtained prior to beginning oral intake, as an objective measure of gastric outlet obstruction. Blind radiological interpretation of these contrast studies suggested that those in the dual therapy group had improved emptying that was trending toward significance when compared to the single study group, evidenced by delayed gastric emptying in 9 (20%) versus 7 (41%) (P=0.08).

Our results suggested the dual therapy group had a significantly shortened length of stay of (10 versus 16 days when compared to the single therapy group (P=0.034). We attributed this difference to a relative reduction in gastric outlet obstruction. Less emptying delay translates into less dysphagia, less need for nutritional support, and shorter overall length of stay. Combining the two relatively simple and low risk procedures of balloon dilation and Botox injection intraoperatively did not significantly extend the operative time. Both can be performed in minutes, and our preference is to scope the patient immediately prior to incision and dilate for 5 minutes.

Additional nutritional support via jejunostomy feedings was used as an indirect marker reflecting a higher dysphagia score attributable to delayed gastric emptying. Although not statistically significant (P=0.22), we observed that a higher percentage of patients in the dual therapy group 27 (59%) enjoyed freedom from prolonged jejunostomy feeding compared to the single therapy group 7 (42%).

The limitations of this study include the inherent bias present in nonrandomized retrospective single center studies. Although considered a high volume center, data obtained from one center may not be applicable in other patient populations. The procedures were performed minimally invasively however there are multiple techniques and various approaches to this procedure. Challenges exist measuring outcomes such as emptying. We choose to have two blinded radiologists separately read the contrast studies. This was an attempt to establish an objective measure of emptying. We find esophagram to be very helpful in patient management when prompt emptying is identified. It should be noted that in cases with delayed radiographic emptying many of these patients do well and not all have clinically relevant delayed emptying.

Anastomotic leak is a well-recognized complication of esophagectomy (5-7). The anastomotic leak rates in our study were less than what is frequently reported. (dual therapy =4%; single therapy =5.9%). We believe delayed gastric emptying is a significant risk for both clinical and sub-clinical anastomotic failure. Furthermore, in the case of anastomotic leaks, delayed emptying can contribute to longer time to heal (24,25).

Pyloric drainage procedures during esophagectomy have value for patients. In some centers intervention with Botox and balloon dilation at the time of esophagectomy may be justified to reduce risks and time associated with traditional procedures. The ease with which these procedures are performed compared to the more traditional pyloromyotomy and pyloroplasty, particularly in the minimally invasive surgery era justifies their use.

Provenance and Peer Review: This article was commissioned by the Guest Editor (Ghulam Abbas) for the series “Minimally Invasive Esophageal Surgery” published in Shanghai Chest. The article has undergone external peer review.

Conflicts of Interest: All authors have completed the ICMJE uniform disclosure form (available at http://dx.doi.org/10.21037/shc.2020.02.07). The series “Minimally Invasive Esophageal Surgery” was commissioned by the editorial office without any funding or sponsorship. The authors have no other conflicts of interest to declare.

Ethical Statement: The authors are accountable for all aspects of the work in ensuring that questions related to the accuracy or integrity of any part of the work are appropriately investigated and resolved. This study was conducted in accordance with the Declaration of Helsinki (as revised in 2013). The study methods and data collection were approved by the Committee on Research Involving Human Subjects (IRB) protocol number 4314. Individual informed consent was waived due to the retrospective nature of the study.