The first successful pneumonectomies were performed almost a century ago, in the 1930’s. For a long time, this surgery was considered standard of care for resection of non-small cell lung cancer until a few decades ago. Indeed, surgeons are currently determined to perform lobectomies with or without bronchoplastic or angioplastic reconstruction in order to avoid pneumonectomy (1). Nevertheless, pneumonectomy remains mandatory in some patients to allow complete resection and adequate oncological outcomes (2).

Pneumonectomy is mostly performed in lung cancer. Subsequently, preoperative workout must be particularly extensive. Patient with metastatic disease, clinical N2 or N3 nodal status, non-resectable tumors (mediastinal extension) must be ruled out. PET-scan and CT-scan examination should be recent (up to one month prior). Suspicion of mediastinal extension should be assessed with thoracic magnetic resonance imaging (MRI) for resectability. Suspicion of pathological N2 or N3 lymph node status should be explored invasively through endobronchial ultrasound (EBUS), mediastinoscopy or thoracoscopy (3). Histological proof of lung cancer should be obtained preoperatively, or at least confirmed intraoperatively through frozen section examination prior to any vascular ligation or bronchial section.

The usual surgical approach for standard pneumonectomy is a thoracotomy through the 5th intercostal space which is most commonly performed through a posterolateral approach, rather than a lateral “axillary” approach. Attention should be given to preserve chest musculature at this point. Indeed, harvesting a muscular flap (latissimus dorsi, serratus anterior) may later be necessary, either during the procedure for bronchial covering or later in case of reoperation for bronchial and/or pleural complication. An intercostal muscle flap can also be harvested during the thoracotomy.

Chest exploration and resectability assessment are then performed prior to pneumonectomy. All adhesions should be divided. The whole pleural cavity must be explored to rule out pleural metastasis or non resectable tumor. Possibility of a parenchymal sparing resection (bronchoplastic and/or angioplastic lobectomy) should also be assessed. 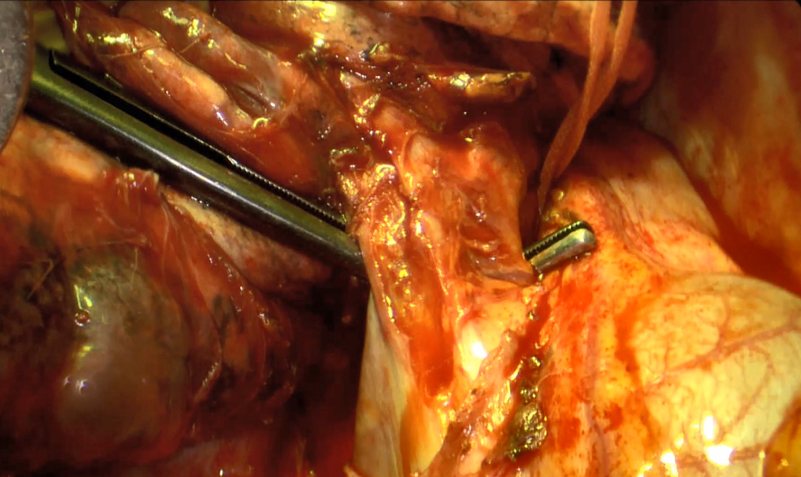 Figure 1 Dissection of the two right pulmonary veins within the pericardium. 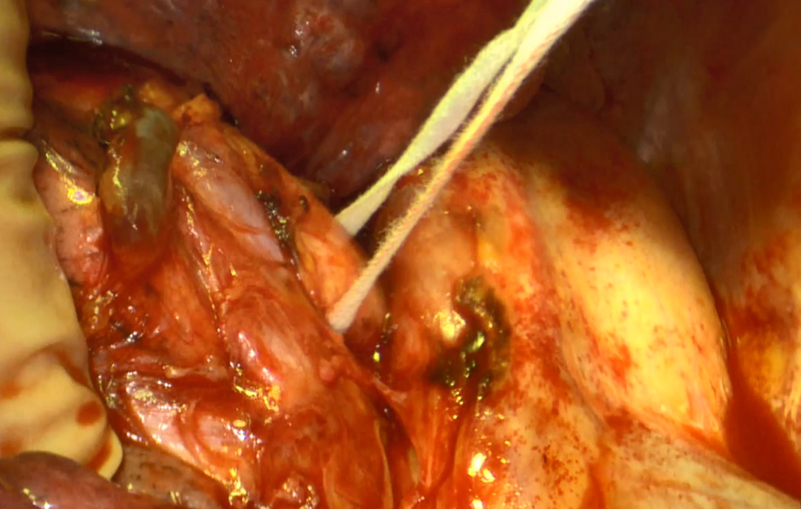 The last step is to divide the right main bronchus, usually from a posterior approach using sharp dissection then blunt dissection to distally peel the peri-bronchial lymph nodes. The right main bronchus is then divided and ligated or stapled. It is important to obtain the shortest bronchial stump without clamping the tracheobronchial tube, to prevent fistula. After the specimen is extracted, the bronchial stump should be tested for air leaks. Bronchial reinforcement is recommended using intrathoracic tissues such as pleural or pericardial fat, intercostal muscle flap, or parietal muscular flap, based on the operator’s preferences and patient’s condition. In case of lung cancer surgery, systematic hilar and mediastinal lymph node dissection is mandatory. Some surgeons perform lymphadenectomy prior to pneumonectomy to enhance the bronchial and vascular dissection. After chest closure, a single drain with no suction is used for pleural drainage.

When performing a surgical resection for lung cancer, it has been demonstrated that ligation of pulmonary veins prior to pulmonary artery is associated with a lower rate of loco-regional recurrences (4). Surgeons usually divide pulmonary veins in the first place but it may be challenging if they are locally involved. In this case, the pulmonary artery can be clamped or ligated first, intrapericardial venous ligation being the final step of the resection (Figure 3).

Regarding suture technique, the use of a bronchial or vascular mechanical stapler allows a shorter suture time, and is equivalent to manual suture. Indeed, meta-analysis showed no differences regarding these 2 techniques in terms of postoperative bronchopleural fistula (5). Therefore, mechanical stapling should be preferred over manual suture in the case of a standard pneumonectomy. Nevertheless, in some cases where anatomy is more challenging due to local condition, a mechanical stapler may be inadequate and the use of a vascular or bronchial clamp with manual suture is required. For the bronchial stump, we suture the posterior mucosa to the cartilaginous ring with separated non absorbable or slowly absorbable 4/0 stiches. Another possibility is to fold the posterior mucosa inside the cartilaginous ring according to the Overholt technique. Regarding vascular stumps after proximal clamping, we use a 5/0 non absorbable continuous suture.

Despite higher morbidity and mortality rates, pneumonectomy remains the only surgical option when a lobar resection is not technically or oncologically possible, even considering bronchoplastic and/or angioplastic procedures. A close attention in preoperative course and intraoperative assessment, associated to a carefully performed procedure including a meticulous bronchial stump management should allow a complete resection and lead to adequate oncological outcomes.

Provenance and Peer Review: This article was commissioned by the Guest Editors (Lorenzo Spaggiari and Luca Bertolaccini) for the series “The Role of Pneumonectomy in Thoracic Surgery in The Third Millennium” published in Shanghai Chest. The article has undergone external peer review.

Conflicts of Interest: All authors have completed the ICMJE uniform disclosure form (available at http://dx.doi.org/10.21037/shc.2020.03.04). The series “The Role of Pneumonectomy in Thoracic Surgery in The Third Millennium” was commissioned by the editorial office without any funding or sponsorship. The authors have no other conflicts of interest to declare.

Ethical Statement: The authors are accountable for all aspects of the work in ensuring that questions related to the accuracy or integrity of any part of the work are appropriately investigated and resolved. All procedures performed in studies involving human participants were in accordance with the ethical standards of the institutional and/or national research committee(s) and with the Helsinki Declaration (as revised in 2013). Written informed consent was obtained from the patient for publication of this manuscript and any accompanying images.