Pneumonectomy for lung metastases: the role in the modern era

Since the publication of the landmark report of the International Registry of Lung Metastasetomy (IRLM) in 1997 (1), pulmonary metastasectomy has been recognized as a therapeutic option with intent of cure in selected patients. Even if there are still no adequately powered prospective randomized trials that compare pulmonary metastasectomy to medical treatment or observation (2), the most significant experiences in the literature emphasize the importance of patient selection in the context of oligometastatic disease and the imperative of achieving a complete eradication of all metastatic lesions while limiting as much as possible the volume of resection to achieve the lowest necessary morbidity (3). In this context, the role of extended pulmonary resections and in particularly of pneumonectomy has been largely debated (4). In fact, the notable high complication and mortality rates (5) along with the relatively limited reported oncological benefits have strongly discouraged this practice. The aim of this study is to place pneumonectomy in the context of oligometastatic disease, to explore and comment the reasons for its decline in clinical practice, in order to delineate the possible role of pneumonectomy for lung metastasectomy in the modern era.

Pneumonectomy represents the surgical resection of a whole lung and can be divided in primary and completion pneumonectomy. The former is performed as an elective procedure while the latter represents the last surgical act, after one or more previous operations (6). Indications to resort to an elective pneumonectomy are typically represented by one or more secondary lesions that cannot be otherwise resected assuring free margins—i.e., centrally located metastases involving both the superior and the inferior lobe, or lesions that critically compromise the fissure or the hilar structure. Completion pneumonectomy is performed to remove the entire remaining parenchyma after previous surgical resections and it is mainly indicated in unilateral recurrences when smaller resections would not leave enough functional parenchyma (7). The literature concerning the role of pneumonectomy to resect lung metastases is composed by sporadic case reports or small series, mostly published between 1995 and 2003 reporting very heterogeneous data (8-16). A selection of these studies is presented in Table 1. All data, except for the report published by Koong (10), derived from single institutions’ experiences based on subsets of fewer than 40 patients, reporting operative mortality rates between 0% and 10.5%, and 5-year survival rates ranging from 17% to 39%. Such data may appear discouraging if compared with those from large series of lung-sparing resections, mostly wedge resections, with reported mortality rates between 0% and 2.5% and overall 5-year survival rates ranging from 20% to 48%, which can reach 56% for sarcoma patients and 82% for colorectal cancer (17-20). In 1998, a series from our center reported on 42 patients who underwent pneumonectomy for lung metastases between 1985 and 1995 (9). In the presented study we present data retrospectively collected with the ideal intent of proceed in the published experience. From 1995 to 2017, 831 consecutive patients underwent pneumonectomy in our center, and only 17 procedures were conducted for pulmonary metastases (2%). Data on clinical and surgical characteristics are specified in Table 2. One patient died on postoperative day 29 because of pulmonary edema, 3 patients (18%) had minor complications treated medically, and 3 patients (18%) had major complications (2 empyema and 1 hemothorax) which required a second surgical intervention (Table 3). The median survival time after resections was 30 (range 1 to 144) months and the overall 5-year survival rate was 29.4%. Such data are not dissimilar from the results reported in the literature, but they highlight a dramatic decrease in the number of pneumonectomies for metastatic disease over the time until becoming almost anecdotic in the last decade. 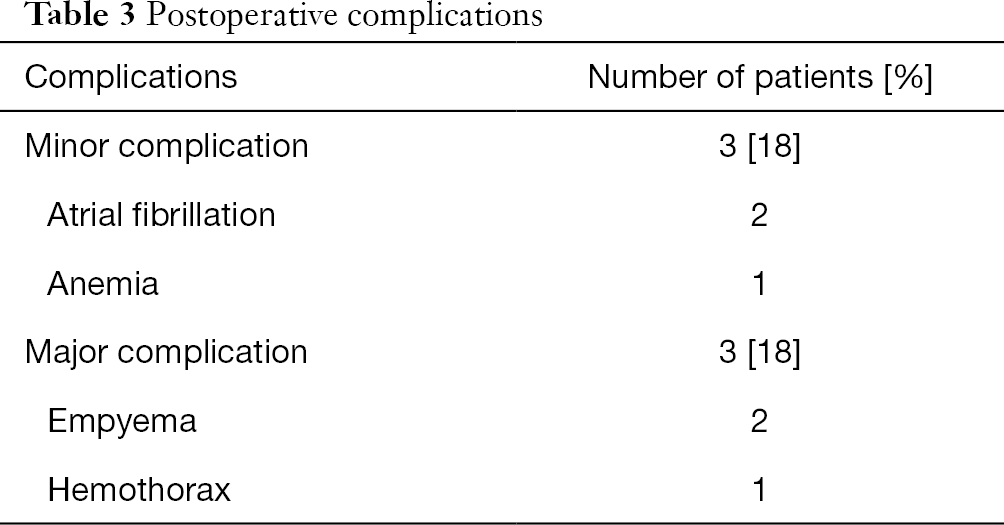 The concept of oligometastic disease, prognostic factors and their implication on pneumonectomy

In 1965, Thomford emphasized the role of pulmonary metastasectomy to improve survival (21) including the use of extended surgery—i.e., pneumonectomy—as salvage procedure. The concept of “oligometastases” was introduced in 1995 by Hellman and Weichselbaum (22). The advances in imaging technology (23), the routinely use of pet-scanner for staging (24), the better comprehension of differential patterns of metastatic spread (25) with regards to molecular biology, pathogenesis and response to treatments, allowed to a novel interpretation of the metastatic disease and a better selection of oligometastatic patients. Careful selection of surgical candidates represents the key to success for surgery and expected long-term disease-free survival. Current recognized oncological criteria to consider surgical resection for lung metastases include (3): (I) the primitive cancer needs to be controlled or controllable, (II) no extra-thoracic metastases—that is not controlled or controllable—exist (III) all of the lesions must be resectable, with adequate pulmonary reserve and (IV) there are no alternative potentially curative medical treatments with lower morbidity. Several different prognostic factors and clinical predictors has been investigated: age and performance status of the patient, disease-free interval, number and size of metastases, histological type, lymph node assessment, positive response to adjuvant medical treatment, previous lung resections, biomarkers quantification and more recently, genotype and mutational burden (26-30). All these features are nowadays part of the multidisciplinary decision-making to identify patients who can benefit from pulmonary metastasectomy and those who should spare unnecessary loss of lung parenchyma. Even if the studies presented in the literature are conflicting (31), the ideal patient for surgical metastasectomy with curative intent has a good performance status, normal pulmonary function tests and presents, after a long disease-free interval, one—or very few—pulmonary lesions with no detectable lymph node involvement and normal—or at least low—tumor specific markers if existing; all the metastatic disease should be totally resectable with the sacrifice of a very limited volume of parenchyma—i.e., wedge resection or segmentectomy, preferably performed using minimally invasive surgery (32).

In a speculative fashion, patients evaluated for pneumonectomy to accomplish a curative metastasectomy rarely meet these criteria. However, the above-mentioned features do not represent strict inclusion principles for surgical resection of pulmonary secondary lesions. Indeed, even if the acquired knowledge of oligometastatic state has widely reduced the number of patients eligible for extended resections and thus the number of patients eligible for pneumonectomy, the presence in the literature of sporadic long-term survival patients after extended resections have not completely excluded pneumonectomy to have a therapeutic role. Nevertheless, the massive improvements in systemic therapies and in locoregional ablation techniques have contributed to the relative disappearance of pneumonectomy as preferable surgical approach to treat metastases.

Over the last few decades, neoadjuvant and adjuvant chemotherapeutic regimens have radically evolved, based on specific patient characteristics, tumor biology, and drug efficacy (33).

Improvements in systemic therapy has deeply changed the course of metastatic disease in all cancer types and have also altered the role of surgery as demonstrated in the management of germ cell tumor (34), breast cancer (35), melanoma (36) or renal cell carcinoma (37) with a high long-term cure rate and clinically meaningful durable objective responses. As a result, systemic treatments have reduced the pool of patients previously addressed for extended resections, proposing an alternative to control otherwise rapidly fatal diseases. Nevertheless, it is unlikely that advanced medical treatments will render metastasectomy obsolete. In fact, systemic therapy may enable a subset of patients with advanced metastatic cancer who exhibit incomplete tumor response and develop residual drug-resistant clones to be considered for curative surgery. Moreover, most solid tumors that metastasize to the lung are still relatively insensitive to currently available therapies, notably sarcoma (38) and colorectal carcinoma (39). Image-guided ablative therapies including radiofrequency ablation (40), cryoablation (41), microwave ablation (42), and laser-induced thermal therapy and stereotactic body radiation therapy (SBRT) (43), have also emerged as potential alternative to surgical resection (44) showing survival rates comparable to those reported for surgical resection (45,46). In 2015 a large French study published by de Baère (47) reported a multicenter series of 566 patients treated by radiofrequency ablation for lung metastases up to 7 cm, with a 5-year overall survival rate for colon cancer, rectal cancer, kidney and sarcoma of 56%, 49.6%, 53.8% and 42% respectively. The major criticism to thermal ablation results the relative low efficacy in centrally located lesions (48) but SBRT seems to overcome this obstacle (49) with a reported 2-year overall survival of 49.6% in 66 patients treated for centrally located metastatic lesions, with very low mortality and morbidity rates. In current practice, image-guided ablation and stereotactic ablative radiotherapy (SABR) are two valid alternatives to surgery in patients with compromised respiratory function or showing major comorbidities. They certainly represent also a valid alternative to surgery in centrally located metastases whose resection would necessitate a pneumonectomy.

Pneumonectomy for lung metastasectomy has been used as a last resort to treat advanced metastatic disease in the pre-modern era, even if its role has always been strongly debated and discouraged. High mortality and morbidity rates and the relatively poor oncological benefit along with a better comprehension of the mechanism of metastases, stricter preoperative criteria for patient selection and the progress of effective therapeutic alternatives have drastically reduced potential indications for pneumonectomy to resect pulmonary secondary lesions. Nevertheless, oligometastatic state still represents a dynamic and controversial terrain. The presence of rare long-term survival patients in our retrospective collection as well as in the literature suggests that pneumonectomy must not be excluded a priori but deserves to be carefully considered in a multidisciplinary management. In the absence of appropriate randomized trials comparing extended surgical resection versus SABR, versus percutaneous ablation versus systemic therapy, any option aimed to cure oligometastatic disease should be considered and pneumonectomy may remain an option.