The stratified, non-keratinized squamous mucosa of the esophagus is a protective barrier that prevents the passage of potentially damaging luminal contents (1). Chronic gastroesophageal reflux can alter this protective barrier by producing a spectrum of changes in the esophageal epithelium (1,2). These changes range from reflux esophagitis to intestinal metaplasia defined by the presence of goblet cells, also known as Barrett’s esophagus (BE). BE is a premalignant lesion that can further progress from a non-dysplastic entity to low-grade dysplasia (LGD), high-grade dysplasia (HGD), or adenocarcinoma of the esophagus (EAC) (3).

The incidence of EAC has drastically increased in the United States and similar Western countries (4,5). Over half of patients with newly diagnosed EAC present with advanced disease. Patients diagnosed with stage I and II disease can undergo curative therapy, however still experience a 20–50% disease recurrence rate (4,5). While the annual risk of progression from BE to EAC is less than 1%, the risk of progression from dysplastic BE to EAC can be as high as 6% annually (1). Therefore, it is imperative identify and eradicate dysplastic BE that may progress to EAC (6,7). New endoscopic technologies that can be performed during surveillance of patients with BE provide an opportunity to intervene on the progression of BE to EAC (8-10).

Patients with chronic reflux symptoms should undergo endoscopy with white-light endoscopy with standardized reporting of mucosal changes, the location of the gastroesophageal junction, the location of the squamocolumnar junction (Z-line), and the location of the diaphragmatic indentation should be completed (11). The diagnosis of BE with or without dysplasia should be confirmed with four-quadrant biopsies taken at 2 cm intervals for nondysplastic BE and 1 cm intervals for suspected dysplastic BE (12). After obtaining a diagnosis of BE with or without dysplasia, further workup for the presence of dysmotility or hiatal hernia repair should be driven by the presence of symptoms and should be conducted prior to planned endoscopic therapy for dysplastic BE.

Careful consideration of when to perform endoscopic therapy for BE is critical to achieving desirable outcomes in the prevention of EAC and eradication of dysplasia (11). Patients with nondysplastic BE undergo surveillance endoscopy with biopsies every three to five years (1-3,5-10,13-17). Patients with dysplastic BE can be challenging in the setting of LGD given the inter-observer variability. Consequently, confirmation by a second pathologist is recommended to establish a diagnosis of LGD (14). BE with LGD has been shown to be successfully eradicated by RFA, specifically (18). Patients with HGD or carcinoma in situ confirmed independently by two pathologists can safely undergo RFA, EMR, or cryotherapy.

There are circumstances which make some endoscopic therapies preferable to others. In situations where the target lesion is circumferential for a long segment (>3 cm), EMR can result in stricture in as many as 50% of cases (19). In contrast, nodular mucosal lesions may be more amenable to EMR compared to RFA or cryoablation as these require apposition of ablation or cryotherapy balloons to the entirety of target mucosa (11). While non-dysplastic BE does not warrant resection in most circumstances, endoscopic eradication should be considered in patients with long segment BE and those at high risk for developing esophageal cancer, such as patients with a family history of esophageal cancer, those with poorly controlled reflux (12). Patient preparation immediately prior to endoscopic therapy with RFA, EMR, or cryotherapy is identical to that of patients undergoing white-light endoscopy. Our practice is to keep patients nil per os from the night prior to the planned procedure. Diet and medications are reviewed at a pre-operative visit and instructions are communicated in accordance with a plan for general anesthesia.

All endoscopic therapies at our institution are performed in an operating room in the presence of an anesthesiologist and under general anesthesia with endotracheal intubation. Moderate sedation is certainly appropriate for patients without great risk of aspiration. With patients placed in the supine position, an adult endoscope was used to intubate and examine the esophagus. The top of the gastric folds and location of the proximal extent of BE are then delineated along with any other esophageal mucosal findings. After an initial anatomical survey endoscopic therapy is performed.

Following an anatomical survey of the esophagus and stomach, nodules, raised mucosa, and ulcerations are identified. After identification of the target lesion for resection, the endoscope is removed. The EMR apparatus (DuetteTM, Cook Medical, Bloomington, Indiana; is assembled ex-vivo and re-introduced with the endoscope into the esophagus (Figure 1A,B). The target lesion is identified and suction is applied. The lesion is suctioned into an end cap on the apparatus and a rubber band is deployed at the base of the lesion. Suction is then released and the lesion can be identified as a pseudopolyp with a rubber band at the stalk (Figure 1C). A sheath is then introduced into the endoscope with a retractable 5-Fr or 7-Fr snare connected to electrocautery. The sheath is advanced until it is visualized within the endoscopic field and the snare is subsequently deployed. The target pseudopolyp is snared below the level of the rubber band. Once it is visually confirmed that the pseudopolyp is the only structure within the snare, electrocautery is applied with a foot pedal to the snare and the snare is tightened around the lesion. The target pseudopolyp can then be seen completely free of surrounding tissue and at the base of the mucosectomy, submucosal tissue can be identified and inspected for full thickness perforations, underlying BE, or visible vessels that require hemostasis (Figure 1D). The target pseudopolyp can be removed using a suction cap, endoscopic suction, or can be pushed into the stomach where it can be retrieved with an endoscopic net at completion of the procedure. 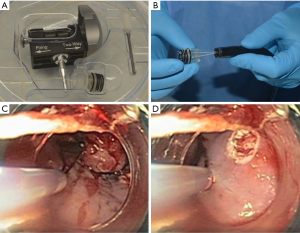 EMR using multiple techniques has been shown to be a safe method of endoscopic eradication therapy for BE with dysplasia (20-23). Complete eradication of dysplastic BE has been noted in more than 96% of patients in multiple studies (20,21). Furthermore, EMR has played a role in accurately staging neoplastic BE, with as much as 31% of patients being re-staged following EMR in one study (22). Multiple large studies have shown that EMR is efficacious in the complete eradication of dysplastic BE more than five years following resection (20,21). Resections are completed in piecemeal in one-third to two-thirds of patients (20,21). Long segment BE (>3 cm), piecemeal resection, older age, and advanced pre-treatment histopathology have been identified as independent risk factors for recurrence of dysplastic BE after EMR (21,24).

Complications occur rarely after these procedures, but periprocedural bleeding and perforation requiring further therapy have been noted in fewer than 1% of patients. Esophageal stenosis is a long-term complication that affects fewer than 5% of patients and may require further endoscopic intervention in several studies (20-22).

The esophagus is intubated with an adult endoscope and surveyed for grossly suspicious lesions. Dilute n-acetylcysteine is then used to irrigate the esophagus and a guidewire is passed beyond the gastreoesophageal junction (GEJ) under direct visualization through the side-port of the endoscope. Our preference is to use the BARRXTM HALO360 system (MedTronic, Minneapolis, MN) (Figure 2A,B). A sizing balloon is then passed over the guidewire and through the side-port of the endoscope and is inflated under direct visualization proximal to the visualized BE (Figure 2C). The balloon is inflated to the point of circumferential contact with the esophageal mucosa. Ideally, there should be minimal craniocaudal and rotation motion within the esophageal lumen after inflation of the balloon. The sizing balloon is then removed while keeping the guidewire in place. The ablation balloon is then passed over the guidewire such that the electrode edge is 1cm above the proximal extent of BE. The ablation balloon is then inflated and 10 to 12 J/cm2 of energy is delivered over three seconds. The balloon can be deflated and repositioned as necessary to ablate remaining BE to the top of the gastric folds. The ablation balloon is then withdrawn, the sloughed mucosa is inspected and mechanically debrided with a friction cap and repeat ablation is performed in the same manner (Figure 2D). Prior to completion of the endoscopy, the esophageal mucosa is examined for full thickness perforations. 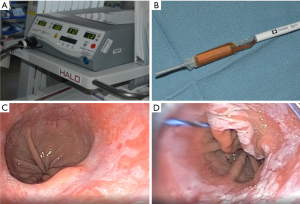 The esophagus is intubated with an adult endoscope and surveyed for suspicious mucosal lesions. A nasogastric tube is passed into the stomach parallel to the endoscope and attached to suction to allow for passive and active venting of nitrogen during the procedure. The cryospray system (truFreeze®, CSA medical, Lexington, Massachusetts) (Figure 3) is powered on and a full liquid nitrogen tank is confirmed. Following identification of the lesion, a 7-Fr cryospray catheter is advanced through the side channel of the endoscope, again confirming the presence of a decompression tube within the stomach. Once the cryospray catheter is aimed at the target lesion, liquid nitrogen is delivered at –196˚C until the tissue appears frozen (20 s) on endoscopic visualization. The tissue is then allowed to thaw and the freeze cycle is repeated two to three times.

Following completion of cryoablation, the cryospray catheter and decompression tube are removed. The esophagus is inspected for full thickness perforations and the stomach is suctioned.

There are relatively few studies examining the effect of cryoablation in the absence of prior therapies for neoplastic BE (28-30). Cryoablation is safe and has had varying degrees of efficacy among trials, ranging from approximately 80% complete eradication of dysplastic BE to 100% (28-30). Recurrence rates range from 14% to 18% over follow-up periods up to three years (Thota, gosain) (28,29). While dysphagia requiring dilation can occur in up to 10% of patients, the most serious adverse event that has been gastric perforation requiring laparotomy secondary to distention in the absence of adequate venting (29-31).

Upon completion of endoscopic eradication therapy for BE, patients are recovered in the post anesthesia care unit. Patients in good condition with pain adequately controlled, usually with non-narcotic analgesia such as alternating acetaminophen and ibuprofen, are discharged home. Patients are discharged on twice daily proton pump inhibitors. Patients are initially resumed on a clear liquid diet in the postoperative anesthesia care unit and advanced to a soft diet for two to four days as tolerated. Patients are educated on alarm symptoms such as chest pain, fevers, abdominal pain, dysphagia, inability to tolerate secretions, and dyspnea.

Patients are seen between one and two weeks post-operatively and a follow-up endoscopy is performed one to two months after the index procedure. During this endoscopy the previously treated mucosal lesions should be assessed for the need for either repeat or alternative eradication therapies. The esophagus should be thoroughly inspected for the development of metachronous lesions as well.

Endoscopic eradication therapy can be performed using a variety of technologies, including EMR, RFA, and cryotherapy. These are all safe and effective technologies which can be used alone or sequence depending on the clinical scenario. Table 1 summarizes findings of recent literature presented in this review regarding the use of EMR, RFA, and cryotherapy. In summary, endoscopic eradication should be considered for patients with dysplastic BE or intraepithelial neoplasms, or for high-risk patients with non-dysplastic BE.

Table 1 Review of endoscopic eradication therapy for BE
Full table

Provenance and Peer Review: This article was commissioned by the Guest Editor (Ghulam Abbas) for the series “Minimally Invasive Esophageal Surgery”, published in Shanghai Chest. This article has undergone external peer review.

Conflicts of Interest: Both authors have completed the ICMJE uniform disclosure form (available at http://dx.doi.org/10.21037/shc.2020.02.08). The series “Minimally Invasive Esophageal Surgery” was commissioned by the editorial office without any funding or sponsorship. The authors have no other conflicts of interest to declare.