The main technical principles of chest wall reconstruction are of a stable repair, compatibility of materials and meticulous surgical technique to minimise potential complications and the combination of available technologies. Apart from muscular or musculo-cutaneous flaps and omentum, the most commonly used materials for chest wall reconstruction are metal bars, various forms of plastic mesh, titanium mesh, cement and occasionally cadaveric bone. The use of 3D printing is gaining its popularity, but it is still in the experimental stage.

In lung cancer surgery, chest wall reconstruction may be required after chest wall resection performed due to direct invasion of the tumour into the chest wall. If the tumour is located in the lung apex (Figure 1) causing Pancoast syndrome, reconstruction is rarely indicated, however it may be necessary to prevent dropping of the shoulder and maintaining the shape of the chest wall close to normal. In these cases, the metal bars may be used to recreate the anatomically acceptable shape of the chest wall. StraTos bars (MedXpert, Germany) could be quite useful, because it is possible to bend them to the required shape and to secure them normally or in the invert position if required (Figure 2). The repair of the first rib is usually not possible and not usually performed. 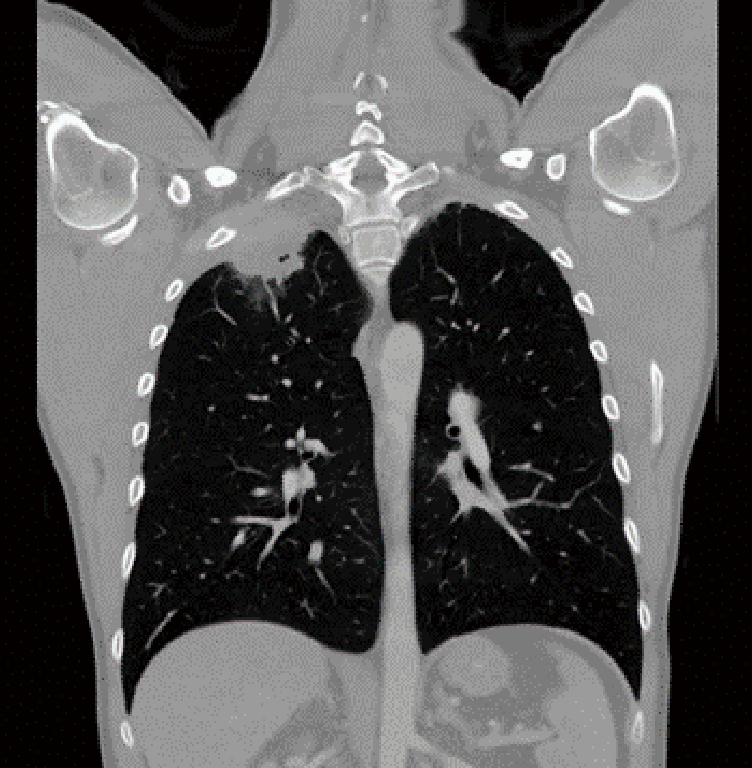 Figure 1 Carcinoma of the upper lobe of the right lung invading the apex of the right chest cavity. Coronal reconstruction of CT scan. CT, computed tomography. 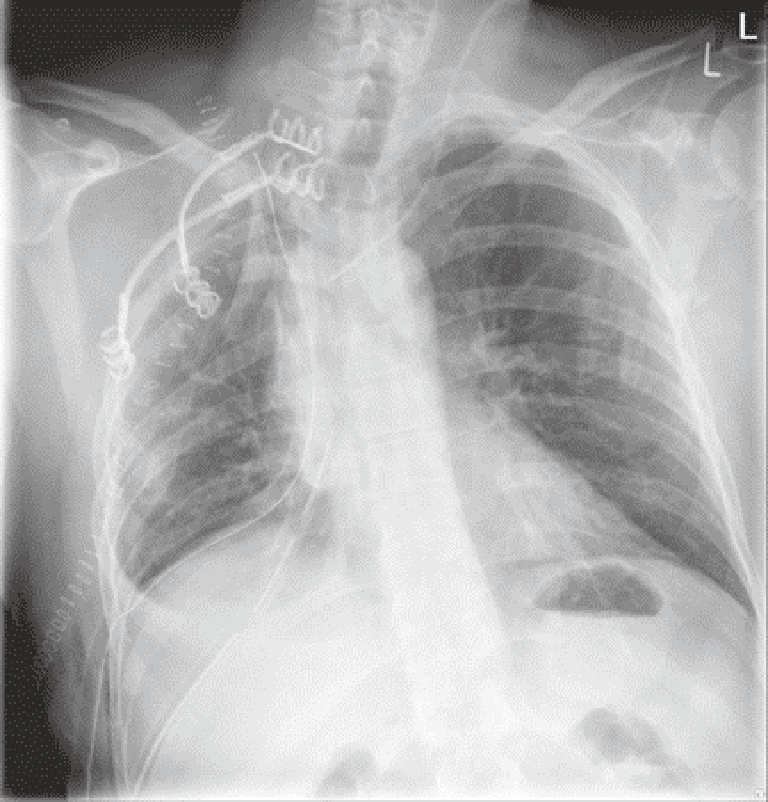 More frequently chest wall reconstruction is required for peripheral lung cancer invading lateral aspects of the chest wall. In this situation absent ribs also could be replaced by various forms of titanium bars, such as titanium Stratos bars (MedXpert, Germany) which are available in different size and could be also trimmed according to the individual need (Figure 3). If the muscle defect over the bars is significant, overlying Prolene mesh may be helpful to prevent lung herniation in the postoperative period. 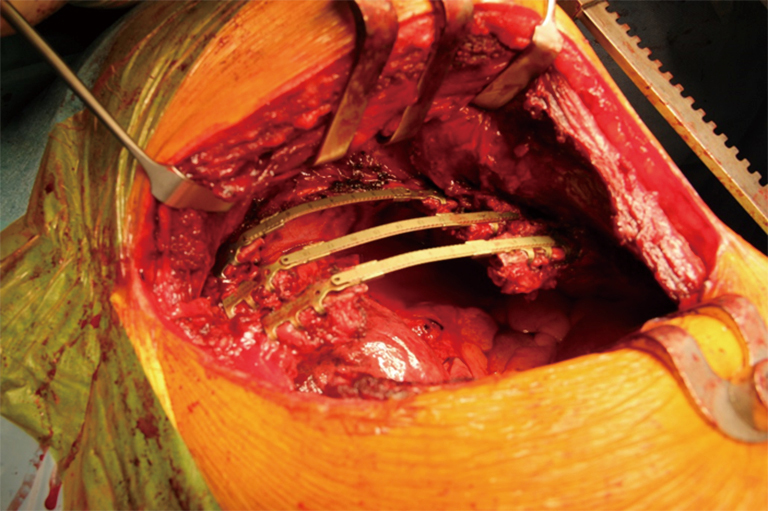 If the defect of the chest wall is very large, particularly after resection of a primary malignant tumour of the chest wall and where is no technical possibility to secure metal bars, a combination of cement and natural flaps could be an ideal option. Most commonly used is methyl methacrylate bone cement in combination with a synthetic mesh (4) applied to the defect and covered with a latissimus dorsi muscle flap. Following resection of the sternum, one of the ways to replace the defect would be to use a cadaveric sternum, which is put in place and secured with various forms of metal bars attached to the adjacent ribs.

Complex chest wall reconstruction is also indicated in patients operated for borderline pathology such as aggressive desmoid fibroma or other benign or borderline pathology of the chest such as fibrous dysplasia of the rib. The defect after resection may be very large because desmoid fibroma requires wide incision due to well-known tendency to grow deep onto the skeletal muscle so the defect could comparable to the defect expected after resection of a malignant tumour.

In these cases, the implantation of a metal bar covered with Prolene Mesh would be ideal to resolve this problem (Figure 4). Amongst the varieties of metal bars in place, it is preferable to use bars made from titanium because this metal is inert and rarely causing infective complications. 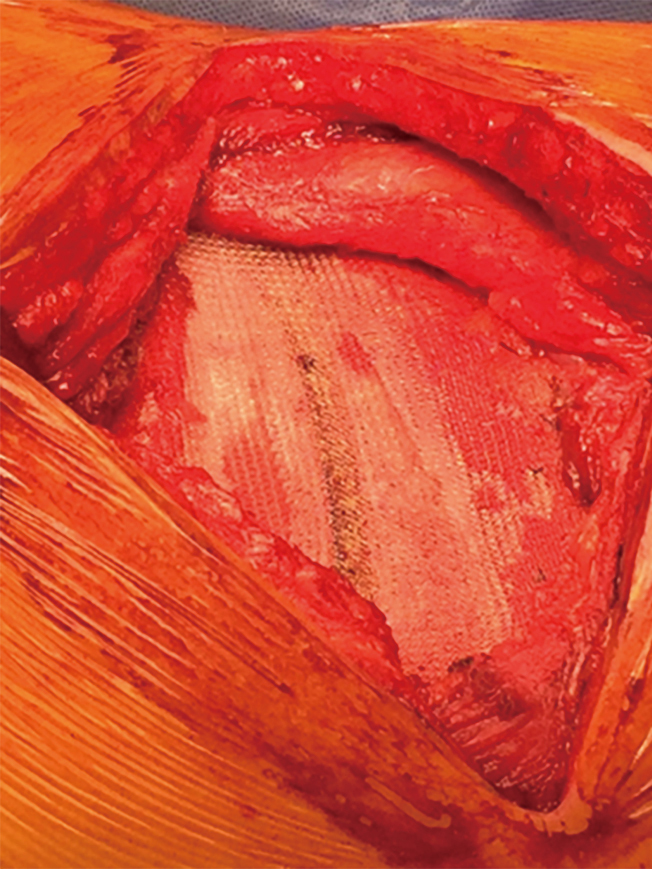 Figure 4 Resection of the left 6 rib with chest wall reconstruction using StraTos bar and Prolene mesh. Intra-operative view. The head end of the operating table is on the right.

Another area of chest wall reconstruction, which could be considered complex is the repair of congenital chest wall deformities such as pectus excavatum or pectus carinatum in young adults or occasionally in patients with a more advanced age. Many versions of the same procedure originally suggested by Ravitch (5) exist, and all of them include the repair of the normal anatomy with the stable fixation of the repair. This surgery is performed via a transverse incision with a patent placed in a decubitus position. For this purpose, titanium bars are also ideal because they allow to maintain stability, but these bars require removal at a later stage, which is the down side of this procedure. The reconstruction may also be semi-rigid. As an example, the sternum may be secured with strips of Prolene Mesh positioned under the sternum and attached to the bony ends of the resected costal cartilages using non-absorbable sutures making them adequately tight after one end is properly fixed. This type of repair does not require a repeat procedure to remove the mesh.

Another area of complex and difficult surgery is operating on patients with complications of attempted repair of congenital chest wall deformities. The usual indications in this situation would be sub-optimal correction, retained metal constructions (Figure 5), persistent pain and an unstable chest. 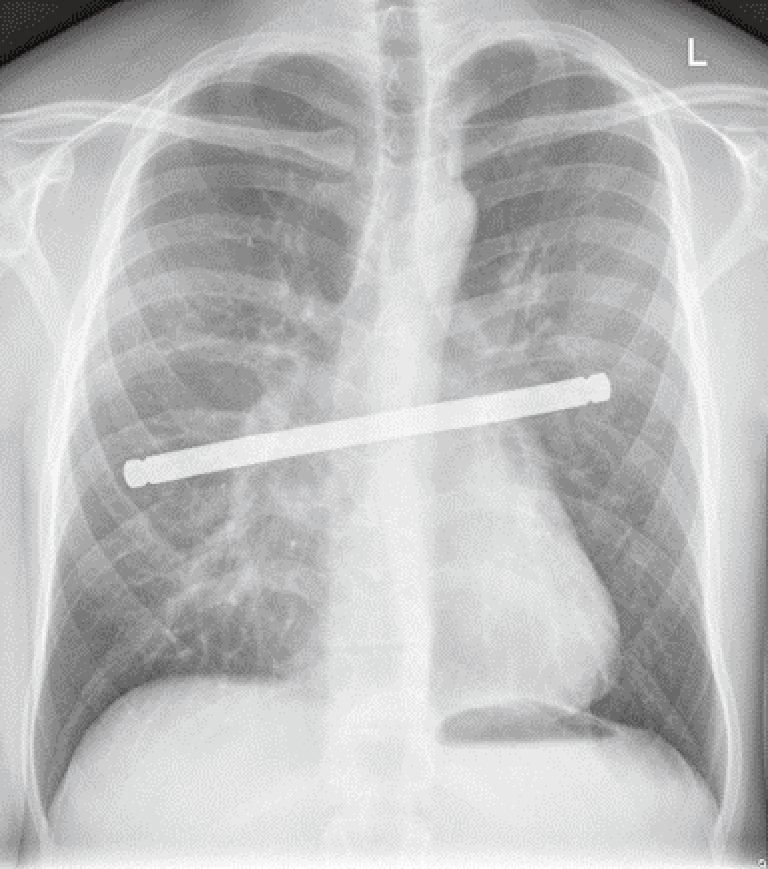 Figure 5 Chest X-ray of a patient with a retained displaced metal bar after correction of pectus excavatum deformity. Failed attempt to remove the bar.

For this kind of surgery, a wide surgical access is usually required. Even though a transverse incision is preferential, the old incision should be used, if previously a vertical incision was employed (Figure 6). An attempt to just perform a minimal procedure usually is not satisfactory because it does not lead to a desired result and does not allow to remove firmly embedded foreign material into the chest, so full exposure and complete reconstruction is required to achieve nearly normal anatomy and firm stabilisation. 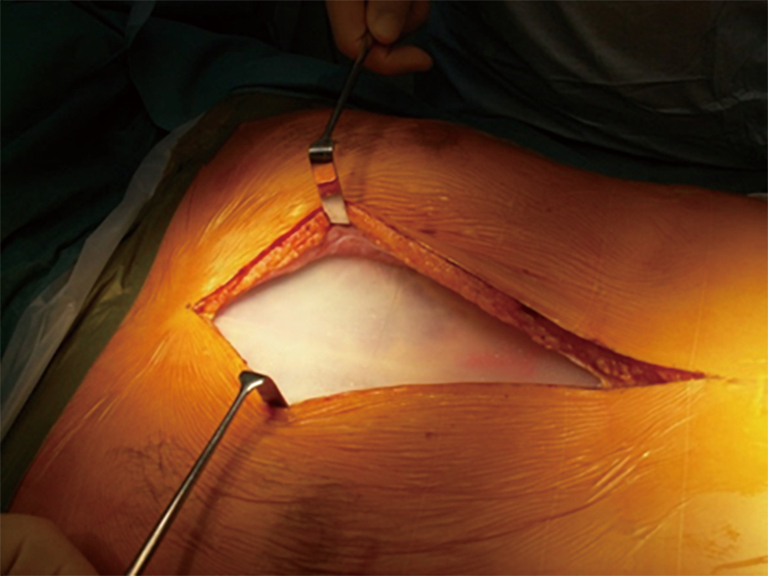 Figure 6 Same patient as on Figure 5. A Silicon implant in front of the sternum causing pain and discomfort. A vertical incision through the old scar was used. The head end of the operating table is on the left.

A relatively rare, but a very problematic area of chest wall reconstruction is late dehiscence of the sternum after median sternotomy routinely used in cardiac surgery (6). This type of sternal dehiscence usually occurs 3–6 months after sternotomy. Patients who are prone for this complication frequently have diabetes and an increased body mass, osteoporosis and bilateral harvesting of internal thoracic arteries.

Indications for reconstruction of sternal non-union after sternotomy are relatively simple. These patients suffer from persisting symptoms of an unstable sternum such as pain and unpleasant movements even with minimal changing of the position of the body. Some of them previously underwent various interventions to repair the sternum and in the majority the sternum is almost completely destroyed (Figure 7) with a substantial gap and multiple fragments of broken wires. 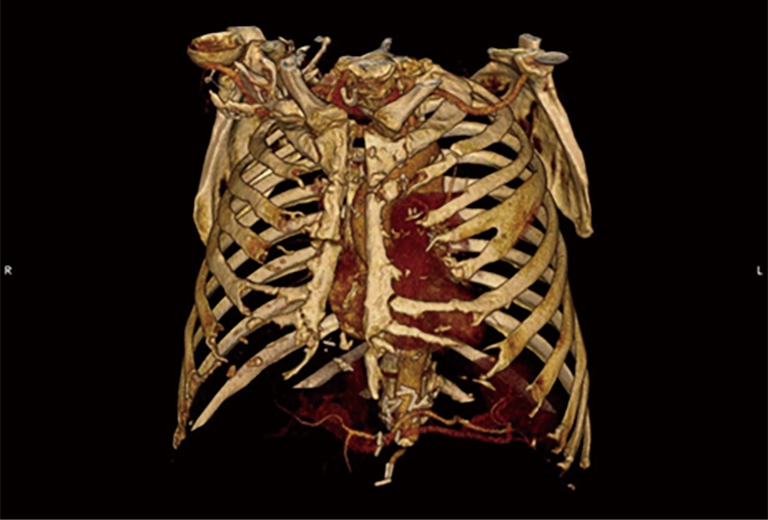 The priority here is to ensure that the underlying disease is controlled and that the comorbidities of these patients are manageable.

The main principle of sternal reconstruction for sternal non-union is firm stabilisation. It is necessary to fill the sternal gap with healthy tissue and to stimulate bone regeneration. To minimise the risk of the procedure the interference behind the sternum should be avoided to prevent damage to the patent grafts or major anatomical structures in the heart. The main surgical steps of reconstruction of sternal non-union are exposure of the defect via the existing sternotomy scar with lateral mobilisation of pectoral muscle flaps. After that the sternotomy gap could be refreshed on the edges and all foreign bodies such as broken wires, detritus and non-viable tissue should be removed.

The bone graft could be harvested from the edge of the sternal defect with excising the edge of the sternum with an oscillating saw and bending them into the defect. Additionally, bone chips from the ribs and the xiphoid process should be harvested and placed into the sternal gap. After that the sternum should be reliably fixed with titanium bars (Figure 8). To improve the blood supply an omentoplasty would be an ideal step and for this reason laparotomy and harvesting of the greater omentum based on the right gastro-epiploic arcade is necessary. Harvesting of the greater omentum is performed in the usual fashion creating a flap adequate in size and dividing the vascular tributaries between the right gastro-epiploic arcade and the gastric wall. The harvested flap is transposed in front of the sternum via a window in the anterior portion of the diaphragm to decrease the risk of postoperative incisional hernia (Figure 9). Two vacuum drains should be placed. 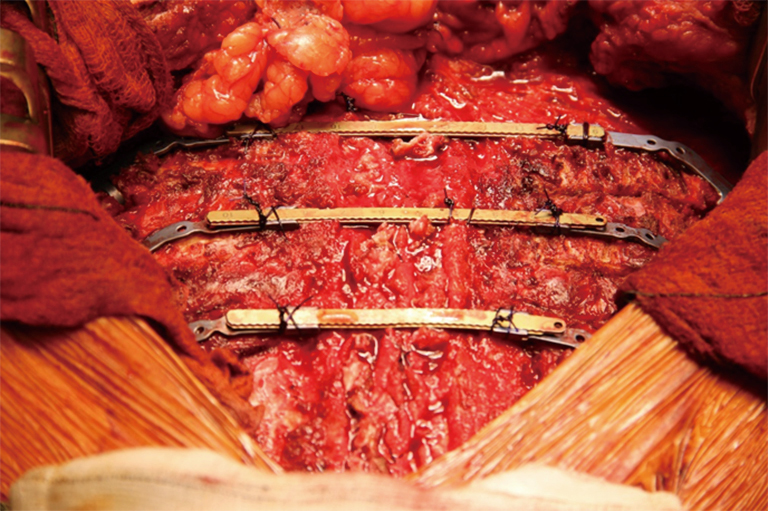 Figure 8 The sternal gap is filled with bone grafts and the sternum is stabilised with three titanium StraTos bars. A view from the head end of the operating table. 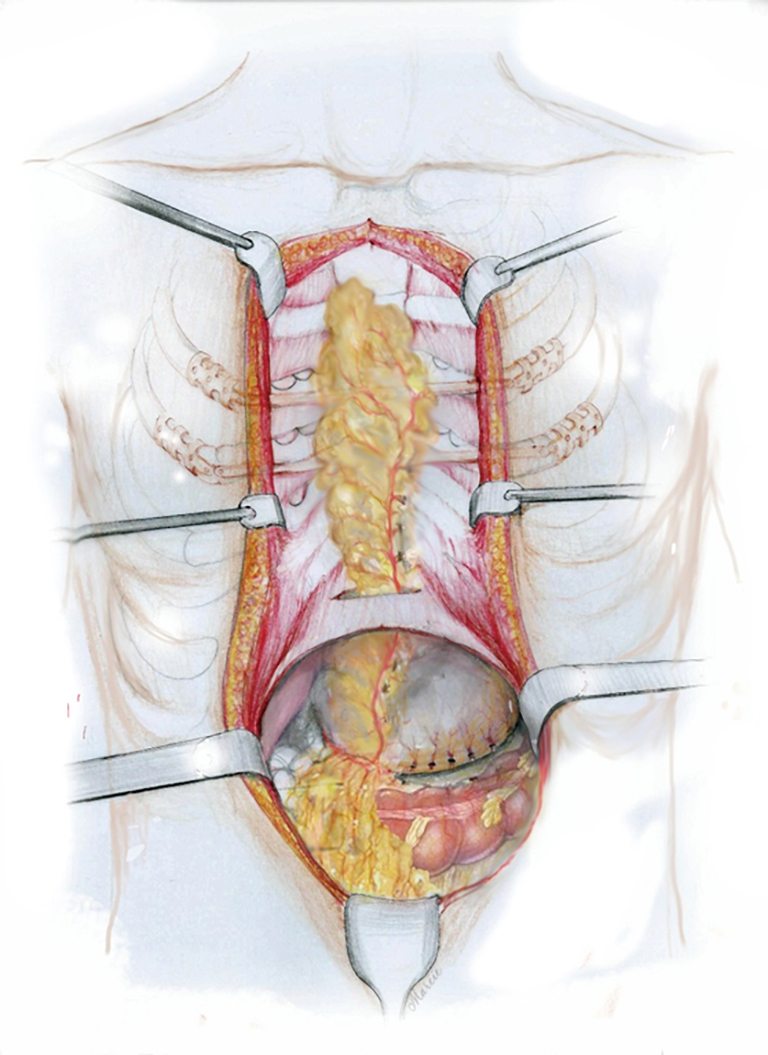 Figure 9 Complex repair of sternal dehiscence. A flap from a greater omentum is harvested and placed over the repaired sternum.

After any complex chest wall reconstruction, patients may experience persistent pain, which is relatively rare and the rejection of foreign materials and late infection. In some situations, a persistent deformity could be seen and become a problem. The possibility of breaking or displacement of the bars should be kept in mind as well as the recurrence of tumour if surgery is performed in patients with cancer. For that reason, every patient after complex chest wall reconstruction require long term follow up. Particular attention should be paid to the development of new symptoms or a change of the existing symptoms. Options of redo surgery should always be kept in mind.

In general, modern techniques of chest wall resection and reconstruction expands the surgical options of patients with chest wall defects and reconstruction should always be considered as part of the treatment plan for patients. The operating team may include not only a thoracic surgeon, but other specialists as well depending on the local expertise, because a combination of surgical modalities is usually required.

This paper has been presented at “2 International Forum on Thoracic Surgery” 19-24 November 2019 Shanghai, China.

Ethical Statement: The author is accountable for all aspects of the work in ensuring that questions related to the accuracy or integrity of any part of the work are appropriately investigated and resolved. All procedures performed in studies involving human participants were in accordance with the ethical standards of the institutional and/or national research committee(s) and with the Helsinki Declaration (as revised in 2013). Informed consent was achieved from the patients for publication of this manuscript and any accompanying images.