Ileocolonic interposition has been applied extensively as an alternative method of esophageal substitution for patients for whom gastric tube cannot be used (1-3). A migration of anastomosis caused by the redundant ileum can sometimes occur postoperatively. However, the graft redundancy after colon interposition mostly reported as a long-term complication in the previous studies (3,4). Herein, we describe a rare case in which anastomosis of cervical esophageal-ileocolon translocated to the right side of the posterior mediastinum. Surgery was applied 13 days after the first operation with a definitive diagnosis.

A 72-year-old man with cT2N0M0 lower thoracic esophageal cancer underwent esophagectomy, in which the ileocolon was inserted as a substitute organ via the posterior mediastinum. The patient had received a distal gastrectomy for peptic ulcer 20 years ago. 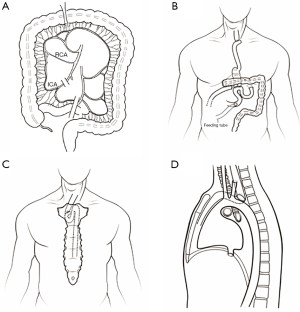 Figure 1 Diagram of the digestive tract reconstruction and the migrated anastomosis. (A) Ileocolic artery was cut at the end of root in preparing ileocolon graft. (B) The reconstruction diagram of Billroth 2 type using the ileocolon graft with Braun enteroenterostomy. (C,D) The anteroposterior and lateral projection of migrated anastomosis of cervical esophageal-ileocolon and tortuous ileum. RCA, right colic artery; ICA, ileocolic artery.

The patient experienced dyspnea, fatigue, and intermittent low fever seven days post-operation. However, detailed physical examination of the neck, thorax, and abdomen was normal. We present the following case in accordance with the CARE reporting checklist (available at https://shc.amegroups.com/article/view/10.21037/shc-22-20/rc).

Computed tomography (CT) scan of the thoracoabdominal region indicated right pneumothorax and pleural effusions, as well as a cycle lesion of 4 cm diameter with air-fluid level in posterior mediastinum near the hilum of the right lung (Figure 2A). Ultrasound images indicated encapsulated pleural effusion in the right thoracic cavity. However, bronchoscopy results were normal. Blood tests revealed white blood cell (WBC) count of 18.5×109/L (normal 4.0–9.5×109/L), 95% neutrophils (normal 40–75%), and elevated C reactive protein of 230.78 mg/L (normal <10 mg/L), which was consistent with infection and inflammation conditions. Chest tubes were inserted from the second intercostal right side, and 150 mL of a yellow foam-like liquid was drained out. Because the patient exhibited air-fluid level on the right side of the lung hilum, which is an indication of possible anastomotic leakage, we re-opened the left cervical incision for drainage. 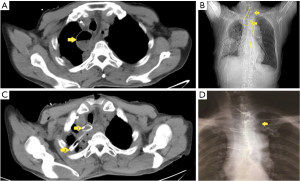 WBC count and percentage of neutrophils were decreased in the following day without pus or sputum discharged from neck incision. Also, no fluid or air was drained from the right thorax. However, the patient developed a fever of about 38.5 ℃ in the afternoon. Chest CT was conducted again, which demonstrated that there was no change of cycle lesion with air-fluid level in the posterior mediastinum. Considering that the abscess formation was as a result of inadequate drainage, a posterior mediastinal drainage tube was inserted via the neck incision, and a little white mucus was drained out. The patient’s symptoms improved after three days. Gastroscopy was performed 12 days after the operation, and anastomosis was observed 20 cm away from the incisor teeth without obvious fistula. The ileum graft formed an angle 10 cm away from the anastomosis. Nasointestinal tube was placed using a gastroscope. Based on a CT scan, we observed that the nasointestinal tube exhibited an “S” shape twist between the anastomosis and sternal notch (Figure 2B). Thus, we concluded that the anastomosis moved to the posterior mediastinum, and the cycle lesion with air-fluid level in the posterior mediastinum near the hilum of the right lung was dilated redundant ileum graft (Figures 1C,1D,2C). The leakage of esophageal-ileo anastomosis may cause the fever, although this could not be confirmed by gastroscopy.

Surgery were applied immediately with the confirmation of twist redundant ileum. We extended the neck incision with semi-median sternotomy. The part of the ileum and anastomosis located on the right side of the spine was carefully pulled out after separating the adhesive. Small leakage was observed at the wall of the anastomosis. The end-to-end cervical anastomosis was re-performed using layer-to-layer and interrupted suture after the excision of excess ileum. T-rubber tube and nasointestinal tube was put in esophageal-ileum conduit.

All procedures performed in this study were in accordance with the ethical standards of the institutional and/or national research committee(s) and with the Helsinki Declaration (as revised in 2013). Written informed consent was obtained from the patient for publication of this case report and accompanying images. A copy of the written consent is available for review by the editorial office of this journal.

Colonic redundancy is a common complication that occurs after esophagectomy with colonic interposition, and it is seldom reported postoperatively (5,6). Colonic redundancy could result from various factors, including an exceptionally long transposed colon or ileocolon, obstruction of colojejunum anastomosis, or migration of the abdominal segment of the colon into the chest (7). However, most cases of colonic redundancy could be attributed to a too-long graft. Typically, the colonic graft is significantly longer than its vascular pedicle on account of arterial arcades. Meanwhile, the vascular supply maintains a straight line from the abdomen to the neck, and the transposed colon could adopt a tortuous course due to its extra length (8). Once colonic redundancy is established, it could cause mechanical dysfunction of the neo-conduit or colonic dilatation. In our case, the ileum was dilatated in the posterior mediastinum because of the obstruction.

Dysphagia is the most common symptom of colonic redundancy (6). Orally administered barium could accurately identify the area of redundancy. Also, endoscopy and CT scan of the neck, chest and abdomen can supplement barium. Our case involved a redundancy of transposed ileum through the retrosternal route and resulted in the migration of esophageal-ileocolon anastomosis. The primary cause was traced to the longer graft ileocolon. Notably, we did not put a nasogastric tube during the primary operation. The redundant ileum and anastomosis were moved to the posterior mediastinum under the intrathoracic negative pressure without the strut of a nasogastric tube. Further, continued negative pressure and tortuosity caused anastomotic leakage. Dilated ileum with an air-liquid level at the posterior of the mediastinum misled us as abscess caused by anastomotic leakage. Therefore, the patient was not orally administered with barium. When the patient shows no improvement, we opted to do an endoscopy and CT. Subsequently, the angle of ileum graft under the endoscope and “S” shaped nasogastric tube in the CT-scan enabled an accurate diagnosis.

Surgical correction was necessary to curb disease progression and modify the tortuosity of the colonic interposition graft. Previous studies reported that surgical intervention should include resection of the redundant colon with re-anastomosis and correction of obstructing elements or adhesions (5,9). These studies further advice that all surgical procedures must be performed with utmost care to prevent injuring the mesentery of the colonic graft, and any dissection should be close to the wall of the colon (5,9). In this case, the ileum redundancy was located in the superior mediastinum. Following a primary neck incision and a semi-median sternotomy, we fully exposed the surgical field. We then carefully divided the ileum and anastomosis while avoiding the possibility of injuring the vascular pedicle of the ileocolon. The esophageal-ileocolon conduit was straightened by resecting part of the redundant ileum, after which an end-to-end re-anastomosis was performed.

To curb the risks of a second operation, such as anastomotic leakage with tissue edema, we placed a rubbery T-tube near the reconstructed anastomosis for at least eight weeks. Notably, external diversion of saliva or intestinal fluids through the T-tube can eliminate the risk of anastomosis leakage. We speculated that placement of the T-tube maintains the neo-conduit diameter while tissue fibrosis proceeds at the anastomotic site during the healing process. Furthermore, the T-tube acts as a support to avoid the severe stricture caused by aggravating periductal inflammation following anastomotic leakage (10). We, therefore, used a T-tube in the secondary end-to-end anastomosis.

Ileocolonic redundancy following anastomotic leakage is an intractable postoperative complication that occurs after colonic interposition. It is important to minimize the length of ileocolonic substitution with a tension-free anastomosis and put a nasointestinal tube in neo-conduit for supporting. Barium swallow, endoscopy, and CT scan are conventionally performed to identify the redundant area. The surgical approach is indicated to relieve the associated symptoms and mitigate the failure of ileocolonic graft construction.

Funding: This study was funded by a grant from Western Medicine Guidance Project of Shanghai Science and Technology Commission (No. 17ZR1426500).

Reporting Checklist: The authors have completed the CARE reporting checklist. Available at https://shc.amegroups.com/article/view/10.21037/shc-22-20/rc

Conflicts of Interest: All authors have completed the ICMJE uniform disclosure form (available at https://shc.amegroups.com/article/view/10.21037/shc-22-20/coif). The authors have no conflicts of interest to declare.

Ethical Statement: The authors are accountable for all aspects of the work in ensuring that questions related to the accuracy or integrity of any part of the work are appropriately investigated and resolved. All procedures performed in this study were in accordance with the ethical standards of the institutional and/or national research committee(s) and with the Helsinki Declaration (as revised in 2013). Written informed consent was obtained from the patient for publication of this case report and accompanying images. A copy of the written consent is available for review by the editorial office of this journal.